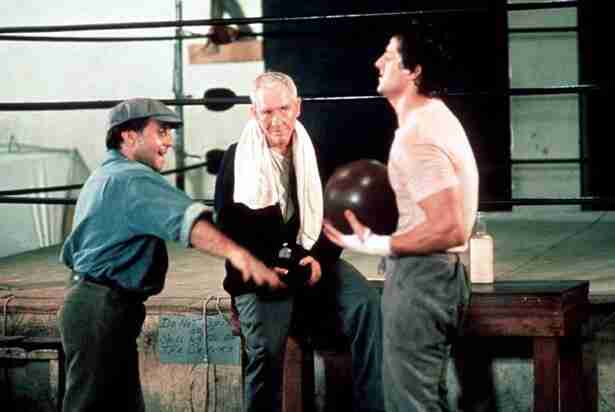 Boxing Trainer for ‘Rocky’ Reveals He Even Cried After Getting Punched

Two fisted Sylvester Stallone, who played a never-say-die boxer in “Rocky,” is really a big baby who was scared of getting hurt – and the actor even cried after getting punched into the ring ropes.

“Syvlester told me he had had a few fights in college and had fought here and there afterward. When I first saw him in the gym, I knew that he had never had a fight.

“He was real bulk. He was a weight lifter and his belly would hang over his shorts. When he stood up straight he looked real fine, but when he went into a boxing stance, his stomach muscles fell down.

“At times I just couldn’t get Sylvester to train. He was forever making excuses.”

The real trouble began, says Jimmy, when the star got too big for his boxing britches. “The more we went into the picture, the cockier he got.”

To take Stallone down a peg, he put the actor in the ring with 45 year old Ray Notaro, owner of the Left Hook Gym in Los Angeles.

Recalled Notaro: “It was in the third round and I was dancing around him and I’m hitting him, not hard. Stallone sort of straightens up and gives me a little tap. He then asks me, “Hey, is that the hardest you can hit?”

“And I told him, ‘Heck, no, that ain’t the hardest I can hit.’  I belted him. That punch left him groping through the ropes.”

Jimmy claims that the actor later hit back at him with a low blow – by taking credit for staging the fight scene that climaxes “Rocky.”

“I was the choreographer for the fight scene, but Sylvester took all the credit,” he said. “I really think he believes he did it all himself.” And a spokesman for United Artists confirmed:

“Jimmy Gambina did all the choreography for the fight scene in ‘Rocky.’ Jimmy did not receive credit.”