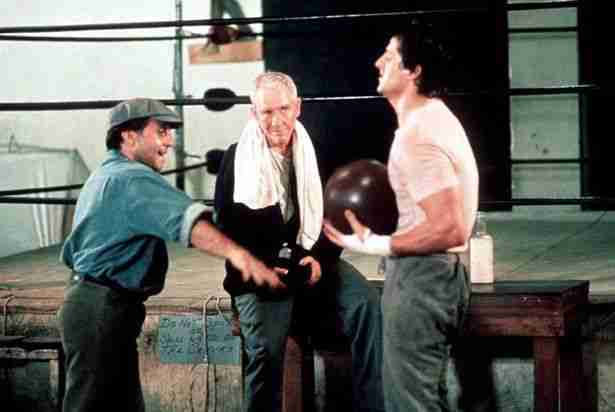 Earlier this month, Total Rocky.com was priviledged to conduct an interview with Jimmy Gambina, Hollywood’s legendary boxing choreographer and one of the original cast members of Rocky.

As you’ll remember, Jimmy portrayed Mickey Goldmill’s right-hand man “Mike” and shared several scenes with Sylvester Stallone, perhaps most memorably the encounter in which Mike explains to Rocky that his gym locker has been given away to another fighter, Dipper Brown.

Later in the film, he can be spotted as one of the corner men shouting commands to Balboa during the climactic Apollo Creed fight.

Mr. Gambina, who made a return to the role of Mike in Rocky V, boasts a string of impressive movie credits that include Raging Bull (1980), The Champ (1979) and Saturday Night Fever (1977).

In 2004, he worked as fight coordinator on Rick Schroder’s boxing film Black Cloud, the story of a Navajo youth who struggles with his mixed-heritage background and finds answers to his emotional conflicts within the ring.

Total Rocky: Tell us about your background – how did you get involved in boxing and then make the transition to films?

Jimmy Gambina: I was born and raised in boxing. My father was a boxing manager with over 200 fighters. I had an amateur fight when I was 8 years old.

TR: Rocky naturally must hold a special place in your film career, what other films have been landmarks for you?

TR: How did you initially get involved in the Rocky project? Were you first hired as Technical Adviser and were then naturally suited for the role of Mike?

JG: I was hired to train Sylvester Stallone. That led me to my profession today as a Boxing Choreographer.

TR: How long did you train with Sylvester Stallone before production began?

JG: We started training five months prior to the film, and the first fight scene.

TR: In your professional opinion, was Stallone talented enough to make good as a real boxer?

JG: It takes a unique type of person, to be good at boxing professionally.

TR: Do you recommend raw egg breakfasts for up and coming contenders?

JG: No, it’s actually bad for you.

TR: Where was the real location for the interior of Mickey’s Gym?

TR: Several members of the cast have described the low-budget nature of the movie, was your role in the production at all affected by the lack of money?

JG: It’s in the taste of the individual, there is no Small Rate.

TR: Were you allowed to put together your own onscreen wardrobe?

JG: Yes, all the kids in Philly that I met dressed me specifically for the sweeping outside the gym.

TR: Just before the fight, Rocky and Apollo are each shown as their trainers force a small bottle in their nostrils. What’s in the bottle and why is it used before a fight? Did the bottles used on the actors actually contain whatever that liquid is?

TR: Was the shooting of the final fight sequence difficult due to having to stop down for makeup changes between each round?

TR: When Rocky says, “Cut me, Mick”, can you explain how the effect of his eye being cut was performed? Also, is this something that is a common occurrence in boxing?

JG: Dramatic license to use, which shows the difficulty of being cut. Not at all.

TR: Was anyone injured during the fight?

TR: Do you have any interesting stories about working with the rest of the cast?

TR: Do you think that Rocky set a trend in how boxing is depicted in films today?

TR: Did you attend the premiere in 1976 and if so, what was that evening like for you?

JG: Yes, what a great evening. The director John [Avildsen] received an Oscar and thanked me for 10 minutes.

TR: How did you happen to make a return to the Rocky series in 1990’s Rocky V?

JG: Stallone asked me to teach his son. It was an amazing experience to be there when his son was born.

TR: Have you heard any buzz about a possible Rocky VI?

JG: Yes. Stallone asked me to work on it last summer, I said “If you want to do it big, do it with class.”

TR: Tell us about your work on Black Cloud – and also, what are you doing currently?

JG: Black Cloud is very close to my heart.