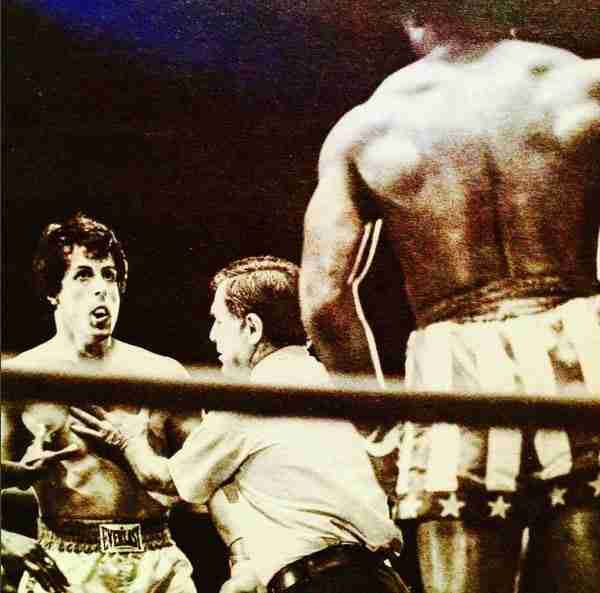 FLASHBACK. Ain't gonna be no rematch!!!

“FLASHBACK. Thank you all for making this ‘long shot’s’ dream come through… Keep Punching!”

Sylvester Stallone took to his Instagram account (officialslystallone) Wednesday and posted several extremely rare photos taken during the filming of the original Rocky back in 1975.

The black and white photographs were captured at ringside during Rocky’s match against Apollo Creed and show the two actors throwing punches. “Showing you some rare shots from behind the camera!” Sly captions one of the boxing images. “It got very physical which was great for the film.” Another image shows Stallone and Carl Weathers preparing for a hit as the film crew surrounds them, including Garrett Brown and his Steadicam, famously identifiable because of his black and white striped shirt.

A final photo shows Stallone inside Mickey’s Gym – actually filmed at Los Angeles’ old Main Street Gym – and Burgess Meredith can just be glimpsed on the fringes. Actor Stan Shaw (Dipper Brown) is seen in the background as his character’s trainer adjusts his headgear.

Stallone’s rare behind the scenes photos appear to be his own cell phone snapshots of framed photographs, likely within his personal collection of Rocky memorabilia.

Showing you some rare shots from behind the camera!… It got very physical which was great for the film

Again nostalgia time. I really like looking back at this moment in time…

Flashback! Rocky versus Apollo Creed! 1976… One of my favorite photos.