“I just gotta be around it.”

One of the boxing world’s favorite locations in Los Angeles, the old Main Street Gym positioned on the fringe of downtown’s skid row was once owned by Howard (Howie) Steindler. Steindler, the victim of an unsolved murder in 1977, was a well-known boxing manager and is thought to have been the inspiration for Burgess Meredith’s character of Mickey Goldmill.

Main Street Gym opened in 1933 (then located at 321 S. Main Street) but burned down as the gym’s night watchman slept. Following the blaze, the gym moved across the street on the second floor above the Adolphus Theater (located at 318 1/2 S. Main Street).

According to our interview with boxing coach Jimmy Gambina, Main Street doubled as the interior of Mighty Mick’s Gym during the filming of the original Rocky and again for Rocky II.

The gym appeared in other films and television programs during that time, too. You can catch a glimpse of the gym interior on a boxing-themed episode of James Garner’s “The Rockford Files”, which aired in the mid-1970’s, and the place looks exactly as it does in Rocky.

Sadly, the old gym was demolished in 1984 and turned into a parking lot, thus it couldn’t be used for its next screen appearance in 1990’s Rocky V when Rocky takes over the gym and visits the dusty and abandoned interior … now just a movie set.

For 2015’s Creed, the exterior of the original Mighty Mick’s Gym in Philly was used, but the interior scenes were (obviously) not shot at the Main Street Gym location.

Main Street has changed dramatically through the years, and now there isn’t a trace of the gym left here to visit. 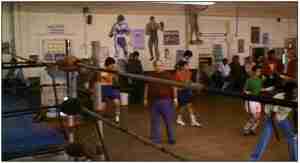 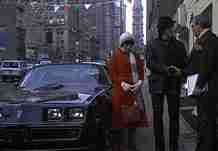