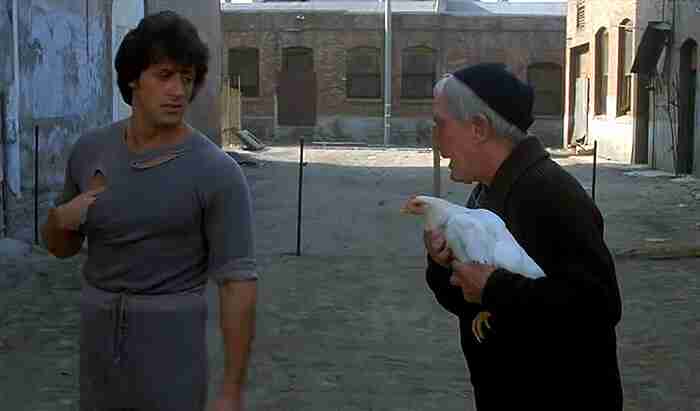 To get Rocky Balboa ready for his rematch against Apollo Creed, Mickey pens the Stallion into a little alleyway and drops down a live chicken.

In reality, old time boxers did use this method as a means to increase their speed in the ring. It was a training technique more likely to have been used by a disadvantaged fighter without access to proper equipment. Fighters like Jack Dempsey, Rocky Marciano and Joe Louis reportedly chased chickens in their day.

Anyway – this scene was filmed not in Philadelphia but on Skid Row in downtown Los Angeles, less than a mile from the real interior of Mighty Mick’s Gym, Main Street Gym.

The establishing shot for the chicken chase was filmed in an alleyway between two buildings along 5th Street, facing roughly southwest towards the old El Rey Hotel which can briefly be glimpsed in the background of the scene.

Today, the area is extremely dangerous and more derelict than ever since it has become one of Los Angeles’ many major homeless encampments.