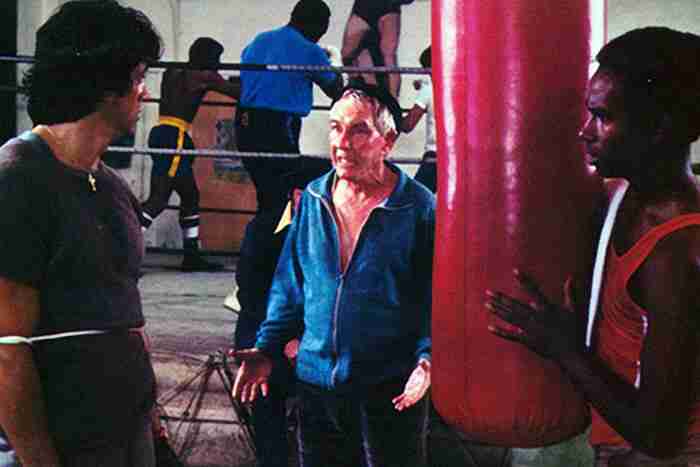 “I just gotta be around it.”

One of the boxing world’s favored locations in Los Angeles, the old Main Street Gym was once owned by Howard (Howie) Steindler. Steindler, the victim of an unsolved murder in 1977, was a well-known boxing manager and is thought to have been the inspiration for Burgess Meredith’s character of Mickey Goldmill.

According to boxing coach Jimmy Gambina, the Main Street Gym doubled as the interior of Mighty Mick’s Gym during the filming of the original Rocky.

In 1979, Main Street Gym was used again for interior scenes of Mickey’s Gym in Rocky II.

Sadly, the gym was bulldozed in 1984 to make way for a parking lot. Today, there’s really nothing to see at the location.

In 1990 during the filming of Rocky V, a lookalike set was constructed for the scenes in which Rocky enters the abandoned gym, and later when the guys clean it up for re-use to train other fighters. The outside of Mighty Mick’s Gym in Philadelphia was still used for exterior shots.

Main Street Gym was a popular filming location during the 1970s and early ’80s and can be spotted in other movies and TV shows of the time. For instance, the gym interior appears in an episode of James Garner’s “The Rockford Files” and looks identical to its appearance in the early Rocky movies.