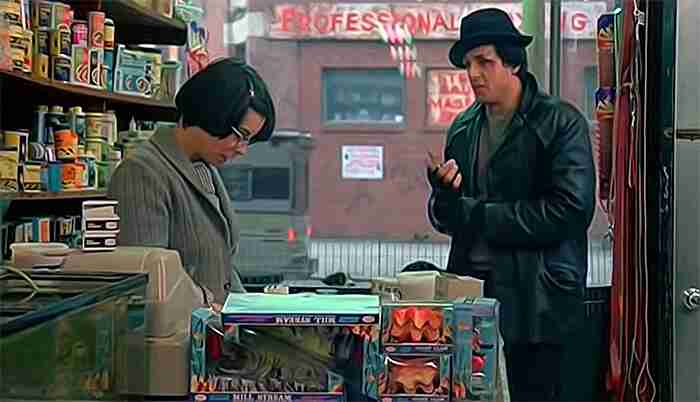 Warning! This particular neighborhood is known to be dangerous – please be alert and aware of your surroundings when visiting. Locals say even Rocky could get mugged on this street.

“How’s the turtle food this week?”

The run-down little pet shop called J&M Tropical Fish where Adrian works was, up until about 2006, a real pet shop.

Since then it, like many other businesses in this area, was boarded up. It was last seen in Rocky Balboa during Rocky and Paulie’s sentimental tour of the old haunts when Rocky peers into the boarded windows. It’s a sad sight that makes for a depressing vibe at this vitally important Rocky filming location.

The Story Behind the Pet Shop

J&M Pet Shop was founded by a Mr. Morris Marks and was later co-owned by his son, Joseph, of Kensington, who, along with his nephew have owned Rocky’s turtles, Cuff and Link since their first appearance in the series. [Read this great article about Mr. Marks over at StalloneZone] Cuff and Link – yep, the real turtles from Rocky – actually reprised their role 30 years later in Rocky Balboa! [Read more about them here.]

Though the female turtles were not originally purchased at J&M as we’re led to believe in the movie, the film crew did drop the animals off at this pet shop when Philadelphia shooting schedule finished.

In one of the rare occasions during the 1975 production, both the exterior and interior of this 1920-era building were used in the film.

The pet shop actually did have a basement, which is where Adrian was headed when shop owner Gloria told her to go down there to clean all of the cat cages. And it was at this shop that audiences were first introduced to Butkus the dog in his first appearance sitting patiently in a large cage.

Real-life former owner Joseph Marks has a prop “J&M” sign created by a studio set designer that he was allowed to keep. And although Talia Shire remembers the days spent filming inside as being rather “pungent”, this shop’s filming location is still all the rage among Rocky fans and has been visited by thousands over the years.

Sadly – though other boarded-up businesses along this street remain standing, in 2017, Adrian’s pet shop was bulldozed.

Mike Kunda’s Travel Tip: “Start by going down near Penns Landing at the waterfront (The Delaware River). Take North Delaware Ave. until you see Frankford Ave. Take Frankford Ave. straight past E. Girard Ave., keep going 20-30 blocks until you see East Norris St. Take a left or go to the next street that allows you to turn left, then go straight a couple of blocks to North Front St. Then take a right about two blocks and on the right is 2147 N. Front St., Mickey’s Gym.”

Robert Plazek’s Travel Tip: “This area is terrific and you essentially have three locations to look at (Pet Shop, Mighty Mick’s, Lucky 7 Bar) J & M Tropical Fish is definitely closed for business. Looking past the iron bars you can still see a cash register and a lot of mess.”