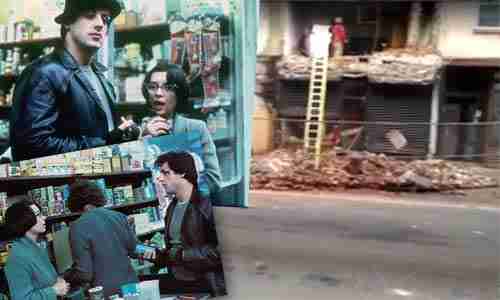 We’re so sad to report that one of the most famous “Rocky” filming locations in Philadelphia, beloved to fans the world over, is being demolished today. No more bad jokes, no more flyin’ candy and no more cat cages to clean. Adrian’s pet shop is gone.

The West Kensington area location, which was for many years a real pet shop, is known the world over as being the Philly pet shop where Rocky and Adrian first met back in the original “Rocky”. The pet shop was prominently featured again in Rocky II, Rocky V and Rocky Balboa. The shuttered shop front could also be seen in the background of the 2015 Rocky spinoff movie Creed.

Mike Kunda, Cue the Rocky Music author and expert guide to all things Rocky, made the trek to the scene of the pet shop’s demolition this morning and provided a video of the destruction. The two-story building’s face has been ripped down into a pile of rubble along a fenced in area of Front Street.

Erected in 1920, the building originally featured an 18′ foot wide shopfront and during the filming of the original Rocky in 1975, was a pet shop in real life. Owned by the Marks family of Philadelphia, J&M Pet Shop’s interior was also used on screen in the Rocky series as Adrian’s workplace. It was this location which provided the background footage of Sylvester Stallone peering into the store windows, playing with the store’s puppies, when the title ROCKY appeared on screen.

The business closed many years ago and the property has been sat vacant for just as long. The glass windows have been concealed by metal roller shields for years in an attempt to protect the derelict building from vandalism and destruction.

We spoke with Joseph Marks, former owner of J&M Pet Shop, who also expressed disappointment at the shop’s demolition. “I know this sounds crazy,” he says, “But it was my hope that maybe something like a Rocky museum could have been made out of that building! But knowing what condition it was in, that never happened.”

While the loss of the building brings him sadness, like so many fans today, Marks chooses to focus on the good times. “I will always have great memories of that shop, and I’m proud that the pet shop played a great part in creating a great movie that put Philly on the map! And went on to win best picture, and best director, as well as tell a story that in this great country, it is possible to go for your dreams and fulfill them.”

The demolition of Adrian’s pet shop marks the second Rocky movie filming location to be destroyed during the past year. A famous boxing venue featured in Rocky V was torn down months ago.

Did You Know? All 3 of Sylvester Stallone's Wives Appear in the Rocky Franchise →