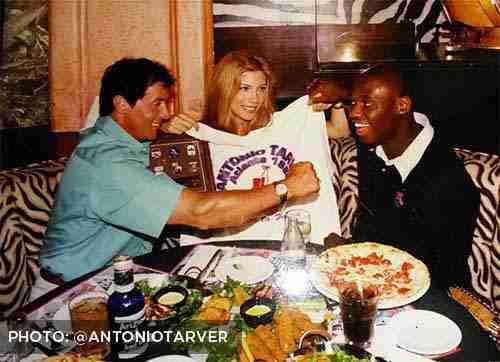 The legend is true, and the Magic Man proved it with a photo.

A full ten years before meeting in the ring in Rocky Balboa, Rocky and Mason “The Line” Dixon really did once share a smorgasbord of delicious appetizers at Planet Hollywood in Florida.

The former light heavyweight world champion posted a snapshot from his private collection on his official Twitter account today with the caption: “#TBT 10 yrs before #rockybalboa the birth of #MasonDixon”. The photo shows a happy scene captured at Orlando’s Planet Hollywood back in 1996.

Writer/director Stallone deliberately sought out Antonio Tarver for the 2006 production of Rocky Balboa to portray the series’ last boxing villain. Sly’s idea was to make Rocky’s final match the most realistic of all the movies by pitting himself against a real-life champion. This didn’t come without some knocks along the way during the December, 2005 filming (read more about the final match here.)

“I think [Sly] got dazed a couple times,” Tarver said in a 2006 interview with Fred Toppel. “I think that’s the skill that I brought to the movie. He’s been in the ring with a lot of fighters, [like] Joe Frazier, and he’s gotten injured, hurt from those fighters because they just didn’t have the wherewithal to, not pull the punches but not turn them over. I think that’s what I brought to the table, the ability to do that. To jab hard but just really right at impact pull it back. I mean, it’s a talent so I’m just glad that I was able to do that and I’m glad that he was able to see that I had that special thing.”