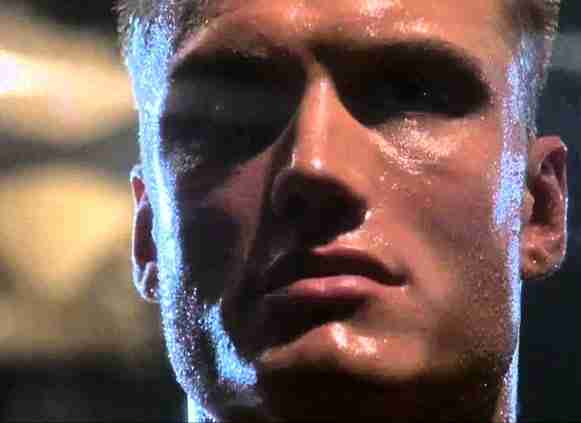 Back in May, we reported the news of another potential Rocky spinoff, this time based on Dolph Lundgren’s Rocky IV character, Ivan Drago. 2015 marks the 30th anniversary of Rocky IV‘s release and later this year, the world premiere of the much anticipated sixth sequel (of sorts) in the Rocky movie franchise, Creed in which actor Michael B. Jordan takes the reigns in the role of a new character, Adonis Creed, the son of Apollo Creed.

The DRAGO storyline picks up post-Rocky IV, after Ivan Drago has spent 30 years in a Siberian prison following his disastrous defeat against American boxer Rocky Balboa during their Christmas day bout in Russia. “Ivan Drago and his brother rule prison from inside its icy walls,” the synopsis reads. “Without thinking of the consequences, the warden predictably enlists mercenaries to dispose of the two. This sets in motion a secret plan of escape, which hinges on Ivan’s ability to win an underground fighting tournament.”

With Rocky fans divided in a love-it-or-hate-it discussion about the idea of this storyline, we asked the screenwriter, Andrew LeMay about some of the top concerns with the project.

What’s the latest on the DRAGO project since we last heard from you in terms of getting the script on the desks of the right people? You’d had some contact with Antonio Tarver initially.

First, let me just say that I am extremely grateful to the ‘Magic Man’ Antonio Tarver for taking the time to pursue this project. After his Twitter like of my Rocky Balboa picture remix, his manager and I hit it off rather quickly which lead to Mr. Tarver getting the DRAGO script. We coordinated press releases to help keep the focus on Antonio’s first fight in his road to the heavyweight title then talked about how confident I am of Tarver’s ability to transform the Mason Dixon character of Rocky Balboa into the cocky, arrogant, anti-hero needed for Drago.

As Lou DiBella promoted the Tarver/Cunningham fight and worked as Mason Dixon’s on screen promoter, I thought it important to get him involved. As Mr. DiBella’s role of the promoter is pivotal to getting Ivan Drago back in the ring, it only made sense to me that I give him much more screen time than he had in 2006. As of last week, the script is currently being reviewed by DiBella Entertainment’s Director of Public Relations to evaluate the overall impact a Drago appearance would make.

From the boxing world, I did have a major setback. Although it’s not the screenwriter’s job to do casting, I always try to envision who could play a particular role. I needed someone to look physically intimidating to Dolph Lundgren, but at six foot five that’s difficult. So I sent the screenplay to the seven foot tall Nikolay Valuev and former two-time WBA heavyweight champion and professional Russian, but now that he’s retired, he wants to present himself in a positive light (which is commendable). Because he has the script, I asked if he’d be interested in playing the Russian Ambassador to the U.S., but haven’t heard back from him. Although six foot six and Russian Vladimir Klitschko who is six foot six and also Russian, but with Antonio Tarver planning to fight Klitschko, I believe that would be a conflict of interest.

Hollywood was a bit different. Winkler Films and Chartoff Productions both flat out refused to take the script or synopsis, but were willing to accept my emails with the logline and talk shop over the phone. Their assistants were extremely nice, but after the Anderson vs. Stallone lawsuit, I can understand why they would be cautious about the material they accept.

On the other hand, I was able to get the full script to Matt Dines, a VP of Development at MGM as well as to the representatives for Anton Yelchin, Mr.T, Macaulay Culkin, Brigitte Nielsen, Christoph Waltz, and most importantly Dolph Lundgren.

Have any edits or revisions been made to the story since it was first publicized?

I did go over the script recently and did some minor changes, but they mainly had to do with Ivan’s back story. I wanted the audience to see that Ivan’s Rocky IV catch phrases weren’t just made up, but had meaning.

A lot of fans who’ve heard about the DRAGO project have been curious about Ivan Drago’s “mafia boss brother” in your screenplay. Can you explain that and how the mafia fits into what we assume is a Russian-based story?

Because it’s been 30 years since we’ve heard anything about Ivan Drago, I needed to solve the question of “where has Ivan been?” Considering he insulted the leader of Russia in front of his generals, soldiers, and every country watching, then lost to an American on Russian soil, I figure death would be Ivan’s most likely penalty. But how would one get out of execution in 1985 Russia? That’s where Ivan’s brother comes in.

If you’re up on the American mob, most bosses continue to operate from inside prison without skipping a beat. They’re pretty smart, connected, and care about family. This applies in Russia as well, except for harsher prison conditions. So, knowing how Russia operates and that he could continue business from inside prison while saving Ivan, Ivan’s brother turns himself in to authorities for a Siberian luxury cell with Ivan as his roommate.

Although the movie starts off at the last fight from Rocky IV and a large portion of the modern day story centers around the plan of Ivan’s brother to get them both out of Siberia, there are two parallel storylines. One, of Ivan Drago and his quest to once again fight Rocky; the other, of Mason Dixon searching for a worthy opponent that will reinvigorate fans to come to watch a fight.

The biggest criticism we’ve heard is the reasoning behind why and how Ivan Drago (now in his mid 50’s) would ever get into the ring with Mason Dixon; why would their paths cross?

From what I hear, prison in America is not a fun place. I can only imagine what a Siberian prison would do to a man who didn’t have something to keep his mind occupied. Ivan’s brother knows this, he occupies Ivan’s time as an enforcer and his mind with the hope of one day being called back into service to fight for Russia. Although Ivan trains to fight Rocky, deep in his heart he fears that opportunity is out of reach.

When Mason Dixon, who is still the reigning heavyweight champion of the world, seeks out Ivan Drago, the Russian government accepts. Although disappointed he is not fighting Rocky, Ivan settles to fight the man whom defeated him last in the ring.

As for age, Ivan Drago is the same age today as Rocky was in 2006’s Rocky Balboa, and Mason Dixon would be in his mid 40’s. As George Foreman was the oldest heavyweight champion at 46, and Antonio Tarver is going for that title today, it’s not out of the realm of possibility that these two could fight. As for Mason Dixon being the champion for so long, all of his challengers were “hand-picked” as Mickey Goldmill put it to Rocky before fighting Clubber Lang.

LeMay will be granting Total Rocky exclusive access to the full DRAGO script in October, 2015. In the meantime, a synopsis is available for download below. Let us know what you think about the project in the comments below.