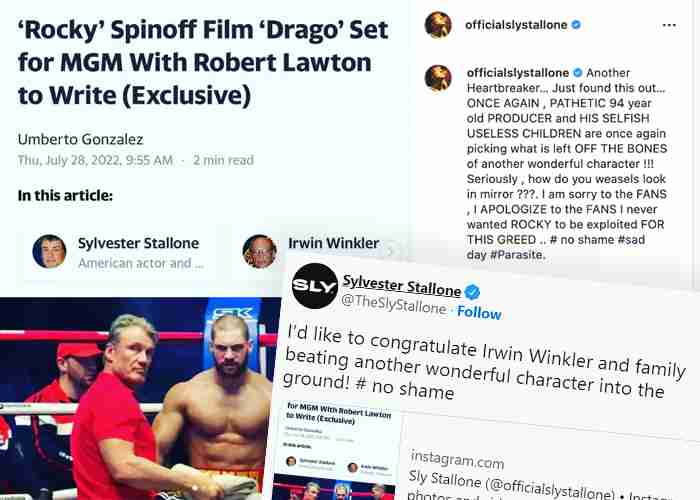 “Another heartbreaker … just found this out,” Sylvester Stallone posted this weekend on social media, going on to describe the recent news that dropped about yet another potential “Rocky” character spinoff, a movie following the Drago storyline.

According to a few news pieces from late July, there’s talk of a Drago spinoff that would focus on Ivan Drago and his son, Viktor Drago who debuted in Creed II and will reappear in Creed III (which, by the way, doesn’t feature Stallone and the reasons why aren’t pretty.)

Back in 2021, Dolph Lundgren teased the possibility of a Drago spinoff in an interview with the Hollywood Reporter, saying: “I think there’s some talk about doing a whole spinoff on Drago with MGM, so you may get more of that.”

Screenwriter Robert Lawton has been tapped to write the Drago spinoff story for MGM, saying “I’m incredibly humbled and grateful for this opportunity, and I’m approaching it as an enormous fan of the ‘Rocky’ franchise, who happens to be a screenwriter.” As of this writing, the Drago project is not listed on Lawton’s IMDB.

Sly: “I apologize to all the fans”

“Once again picking clean the bones of another wonderful character I created without even telling me. I apologize to all the fans, I never wanted Rocky characters to be exploited by these parasites.”

Fans who follow Sly were surprised to see the usually easy-going Stallone explode in recent weeks due to his total loss of rights and ownership of “Rocky”, explaining that 91 year old producer Irwin Winkler and his family have full control over Stallone’s creation.

Winkler and producing partner Robert Chartoff produced the original “Rocky” back in ’76, and it was Chartoff who took a gamble on young Sly, giving him the big break that made his career.

According to Sly, the Winkler family is allegedly controlling and profiting from “Rocky” and characters from Stallone’s Rockyverse, and from the looks of things, there seems to be a tremendous amount of bad blood, even stemming back to earlier Rocky sequels.

“Throughout history so many artists in every industry – recording, painting, writing, you name it have been destroyed by these blood suckers who have destroyed so many families, lining their pockets with other people[‘s] work.”

Amid the controversy, Dolph Lundgren posted the following explanation on July 31:

“Just to set the record straight regarding a possible Drago spinoff. There’s no approved script, no deals in place, no director and I was personally under the impression that my friend Sly Stallone was involved as a producer or even as an actor. There was a press leak last week which was unfortunate. In touch with Mr. Balboa – just so all the fans can relax. There ya go.”

Stallone hit back with a since deleted post saying, “I once had nothing but respect for Dolph but he NEVER told me about what was going on behind my back with the character I created for him! REAL FRIENDS are more precious than gold.”

Super fan and Rocky location scout “Captain Catholic”, one of the few accounts that Sylvester Stallone actually follows (Instagram: sly.stallone.philadelphia) has launched a change.org petition aimed at gathering support for Stallone to regain full creative control over the Rocky characters. Rocky-megafan and television personality Maria Maria Menounos has signed and supported the petition.