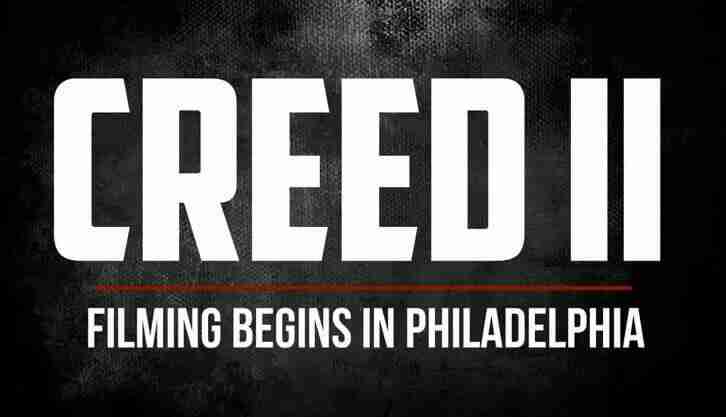 It’s official! Production has begun on Creed II in Philadelphia.

Sylvester Stallone headed to Philly over Easter weekend and as of today, is settling into his trailer, labeled “ROCKY” on the door.

Creed II’s other stars, Dolph Lundgren and on-screen son Florian Munteanu have been on site for the past week or so and were spotted filming at the Rocky Steps and checking out the Rocky statue on a snowy day in March.

Michael B. Jordan, reprising his role as Adonis Creed, has been in training with Patrice Harris who is helping the “Black Panther” star and his on-screen rival, Munteanu, build some hurtin’ bombs for the new movie.

Stallone has posted several awe-inspiring videos on his social media accounts giving fans a sneak peek into his training regimen as he brings Rocky Balboa back to the big screen for the 8th time. Sly has hinted that Rocky is going to punch his Rocky IV rival Ivan Drago at least once in the new film, so it is hoped that Rocky’s cancer is fully in remission and he’ll be fighting fit for the sequel. Time will tell …

Creed II is currently scheduled for release on November 21, 2018.

Leaving my Office to get on a plane headed to Philadelphia to start on CREED 2 , miss the family already but we’re going to make a great film! #mgm #creed2 #elvisgrantphillips #WBC