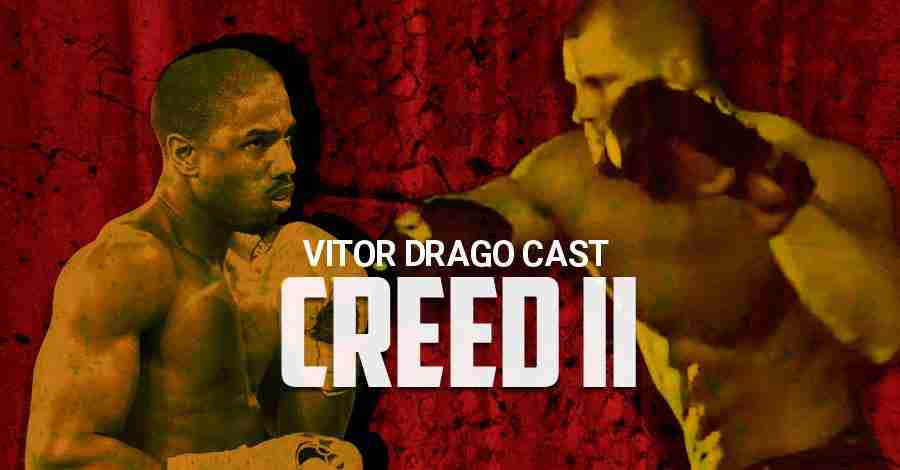 “Big challenges come in all shapes and forms” Teases Stallone

Recently, Moviehole.com leaked tidbits from the casting sheet that Hollywood agents have been circulating in their search for the son of Ivan Drago. His name? Vitor Drago.

Per Moviehole.com, “‘Creed II’ cast the net for ‘Vitor Drago’, a ‘big fighter’ in his late ‘20s with a ‘slight European accent’ to clash with Michael B.Jordan’s ‘Creed’. Vitor (note to X-Men fans : It’s Vitor not ‘Victor’ in this case) has charisma and a hard hand but is as equally as arrogant as his old man – suggesting nobody trains harder and that he’ll win any fight he finds himself in. Like his father, Vitor doesn’t much care if anyone ends up in a wooden box as a result of his unethical boxing practices either.”

“Vitor is Ivan’s chance to claim back his dignity,” the website continues, “In order to help regain some of the pride his father lost at the hands of Rocky Balboa all those years ago, Vitor, his father (Dolph Lundgren) and showy promoter Buddy ‘King’ Charles influentially challenge Adonis Creed to a fight. Just as Rocky did Apollo, the Italian Stallion warns the young Creed against it – even if the Dragos ultimately leave him with little choice.”

Munteau, nicknamed “Big Nasty” weighs in at 231 pounds and stands 6’4″, just one inch shorter than his on-screen dad, Dolph Lundgren. While not a professional actor, Munteanu did appear in “Bogat”, a 2016 German film. His native Romanian accent will lend a nice European ring to the junior Drago on screen in the “Creed” sequel, as will his handsome face.

“Get ready the next generation is about to get into the ring!,” Sylvester Stallone posted on Instagram about the forthcoming movie, which Sly has written and will star in this year.

Referencing a still of Rocky facing off with Ivan Drago in Rocky IV, Stallone wrote: “By the way, in my experience, this was the most Exhausting and punishing fight ever put on film, I can’t believe one of us didn’t end up in the hospital … Oh, I forgot, I did … it was an amazing experience, and Dolph Lundgren is an amazing athlete.”