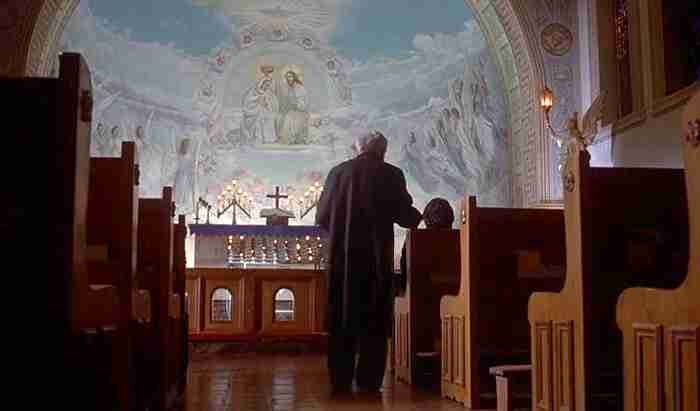 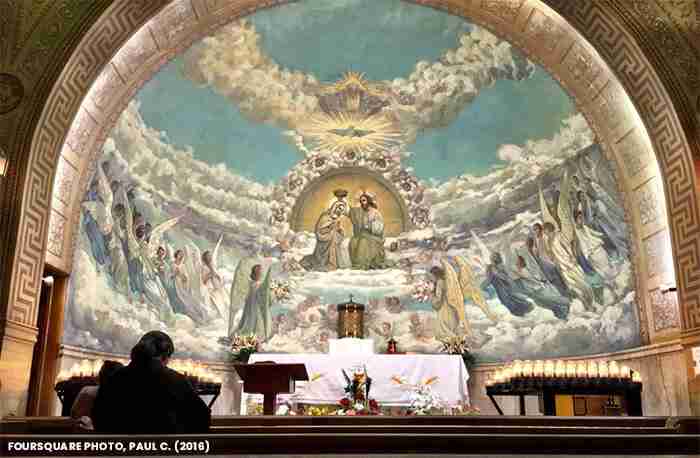 “I don’t wanna get upset in a Biblical place like dis.”

When Adrian falls into a coma during the delivery of her baby, Rocky asks the nurse if the hospital has a chapel. He prays there for several nights when he is joined by Mickey who stays with him during the duration.

Though Adrian is ostensibly in the Philadelphia Hospital where Rocky recovered from his injuries received from his first fight with Apollo Creed, the hospital chapel seen in Rocky II is actually across the country in Los Angeles. Inside, the Church of the Immaculate Conception looks amazingly similar over 40 years later.

Many thanks to Total Rocky contributor Dominic Korzecki for tracking down this location!

Mickey’s speech to Rocky in the chapel

I’d like to tell ya somethin’ once, and then I ain’t gonna say it again.

But Rock, you got another shot. It’s a second shot at the – I don’t know – the biggest title in the world. And you’re gonna be swappin’ punches with the most dangerous fighter in the world.

And just in case, you know, your brain ain’t workin’ so good, all this happens pretty soon. And you ain’t ready. Nowhere near in shape.

So I say, for God’s sake, why don’t you stand up and fight this guy hard like you done before?? That was beautiful. But don’t lay down in front of him like this, like, I don’t know, some kind of mongrel or somethin’. Cause he’s gonna kick your face in pieces.

Well, now, I don’t wanna get mad in a Biblical place like this, but I think you’re a hellava lot more than that, kid, a hellava lot.