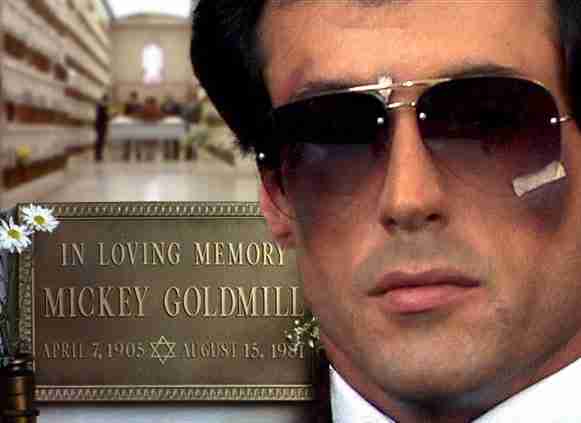 The only mourners present are Rocky, Adrian, Paulie and cut man Al Savani. This scene in Rocky III was filmed not in Philadelphia, but across the country in Los Angeles inside Hollywood Forever Cemetery, in the Beth Olam Mausoleum.

Beth Olam was originally a separate cemetery for Jews at Hollywood Forever, but has since become a part of the bigger picture and is now a section specifically for Jewish interments. It sits next to the newly dubbed Judy Garland Pavilion, so named when the Minnelli family had Miss Garland’s remains flown to Hollywood for reinterment here.

This mausoleum is located on the southwest edge of the park and its most famous real-life occupant is controversial gangster “Bugsy” Siegel, one of the men who built Las Vegas, and who was murdered in 1947.

The stained glass window in this cooridor where Mickey’s funeral scene was filmed features the Star of David (which is also present on Mickey’s gravestone) and the phrase “The Alcove of Peace”.

Hollywood Forever is located in the heart of movie making Hollywood and is within walking distance of Paramount Studios.

The cemetery is a relatively small cemetery compared to such legendary Los Angeles landmarks as the massively sprawling Forest Lawn in Glendale, CA.

Hollywood Forever is most famous as the final resting place of silent film icon Rudolph Valentino. Associated with this cemetery is the well-known story of “The Woman in Black”, a passionate follower of Valentino’s who dressed mysteriously in black and visited his crypt each year following his untimely death in 1926, leaving flowers at his grave.

Many thanks to Rocky Location Detective Brian Lombard for tracking down this filming location!

Hebrew prayer that Rocky speaks over Mickey’s casket is the Mourners’ Kaddish, an ancient Jewish prayer used mainly in situations of mourning.

The beautiful Kaddish honors the dead loved one and praises God, asking for His kingdom to be established here on earth. Check out this great article, “How Rocky Made Me Feel OK About Being a Jew in America.”

Glorified and sanctified be God’s great name throughout the world
which He has created according to His will.

May He establish His kingdom in your lifetime and during your days,
and within the life of the entire House of Israel, speedily and soon;
and say, Amen.

May His great name be blessed forever and to all eternity.

Blessed and praised, glorified and exalted, extolled and honored,
adored and lauded be the name of the Holy One, blessed be He,
beyond all the blessings and hymns, praises and consolations that
are ever spoken in the world; and say, Amen.

May there be abundant peace from heaven, and life, for us
and for all Israel; and say, Amen.

He who creates peace in His celestial heights,
may He create peace for us and for all Israel;
and say, Amen.