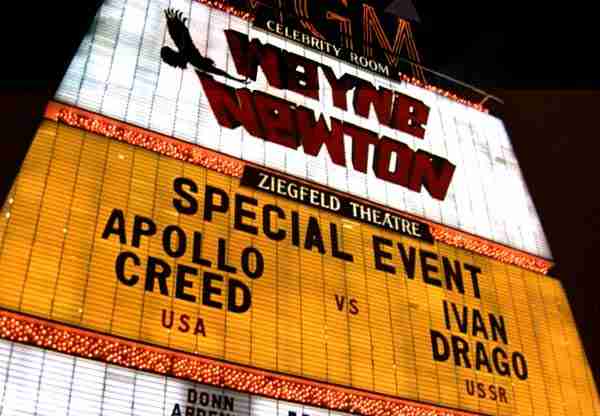 The King of Sting vs. The Siberian Express

Before this extravagant setting was seen as the backdrop for Apollo’s hopeful comeback in Rocky IV, MGM’s original facilities were used by the production crew a few years earlier.

In 1982, the hotel and resort was engaged for use as an arena in Rocky III.

The hotel’s famed Ziegfeld Room was transformed into the site of the exhibition match fought between Apollo Creed and Ivan Drago. This set the scene for James Brown’s larger-than-life production of “Livin’ in America”.

From 1974 until early 1979, the Ziegfeld Room hosted NBC’s “Dean Martin Celebrity Roast” of stars like Frank Sinatra, Lucille Ball, Jimmy Stewart, John Wayne and many others.

In 1986, the MGM became Bally’s, which is still among the most popular venues on the Las Vegas strip.

Carl Weathers Interview at "CREED" Movie Premiere
Adonis to Rocky: "Did you know that Apollo was cheating on Mary Anne?"
Rocky IV Drago Fight Music from Movie
Screenplay for New 'Rocky' Spinoff Based on Ivan Drago
← Main Street Gym King Edward Hotel →
Back to other locations