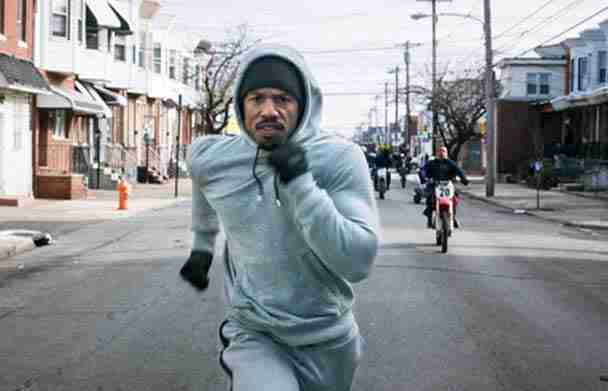 In this scene from Creed, perhaps the most famous in the movie, Adonis Creed is seen running north on Philadelphia’s East Clearfield Street on his way to see Rocky along with his new Philly friends on their quads.

In the very memorable slow motion shot, we see Donny at the intersection of East Clearfield Street and Weikel Street (he’s running north toward Janney Street.)

Michael B. Jordan’s dramatic run culminates in the road in front of Front Street Gym, where Rocky is up on the second floor looking out one of the gym’s windows (see the photo which points to the window Sylvester Stallone is positioned in).

Conveniently, this awesome location is very realistically right on the path towards Front Street Gym, and is also actually less than half a mile from Rocky’s apartment (click here to see it) and Rocky and Paulie’s house seen in Rocky Balboa.

Thanks to Total Rocky contributor Captain Catholic for tracking down this spot!

Creed II & III: Are Film Sequels Already in the Making?
New Film Still from "Creed" Movie Shows Stallone and Jordan Training
Sylvester Stallone: "It’s not Rocky 7. It’s Creed 1."
How Coogler's "Creed" Stacks Up Against the Films of 2015
← Front Street Gym Goodison Park →
Back to other locations