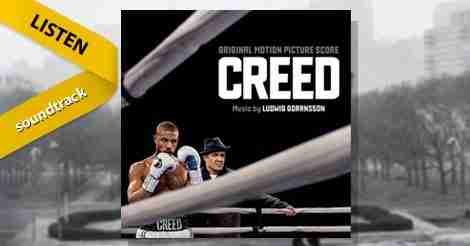 Get ready for some chills, Rocky fans. Portions of the official motion picture soundtrack for the seventh Rocky movie Creed have been released, and although we weren’t keen on some of them (like Future’s “Last Breath” – scroll down to listen), this particular track blew us away.

Entitled “You’re a Creed”, this instrumental recording was composed by Ludwig Goransson who interpolated Bill Conti’s original Rocky Theme for this powerful and hard hitting track which appears on the new movie’s soundtrack.

Before Creed even entered production, Sylvester Stallone said that this new spinoff movie would be totally focused on its new character, Adonis Creed, and would feature an all new soundtrack – no more “Gonna Fly Now” and familiar Rocky music.

Luckily for us, Sly turned out to be wrong, and moviegoers who have seen advance previews of Creed have leaked the exciting tidbit that Rocky’s theme DOES indeed appear in the film, truly bringing the audience to its feet.

Have a listen and enjoy this 2015 take on Conti’s timeless classic.

Order the CREED soundtrack on Amazon