Yo, Rocky! We Got Your Art Right Here! 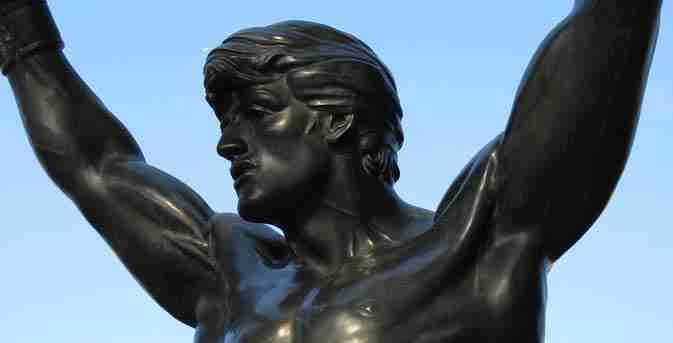 For a muscle-bound palooka, Rocky Balboa has generated his share of artistic debate. Ever since Sylvester Stallone donated the “Rocky” statue to the city in 1982, we’ve acted as if it were a live grenade.

First, we put it on top of the steps of the Philadelphia Museum of Art. Moved it to Wachovia Spectrum, then pulled it from there. Now, a new proposal would put it off Eakins Oval near the foot of the museum stairs.

Last week, the art and architecture committee of the Philadelphia Art Commission did not approve placing the statue at the new site.

Sniffed one commissioner: “It’s not art. It’s a prop.”

Putting location aside for a moment, we think this comment alone is a jaw-droppingly dismissive stance for an arts commission to take.

What is art, anyway?

If we accept one simplistic answer that art is what you find in museums, consider some of the holdings of the Philadelphia Museum of Art: belt buckles, war helmets, teapots, spoons, pottery, jewelry, furniture. Costumes and clothing are frequently exhibited. So are sarcophagi, burial jars, and other objects taken from graves.

Are these in the museum because they’re art?

Or are they art because they’re in the museum?

While you’re thinking of the answer, take our art quiz:

Some of the objects on this page are part of the collection of the museum. Some are not. Can you figure out which is which?

Part of our point is that cultural artifacts can be considered art. The domestic and decorative, sacred and commemorative objects that the museum shows off with its paintings were not all originally crafted to be art, but later were deemed that by the powers that be.

“Rocky” may not be a real person, and the statue may not have been created as an artistic statement, but it is undoubtedly a cultural artifact, one that has the ability to generate strong emotions. Ironically, thanks to the “Rocky” movies, the museum steps themselves have become cultural touchstones. That’s why placing the statue near them makes sense.

Our main beef is with the attitude of the Arts Commission – it doesn’t exactly welcome public discussion or debate. If the commissioners don’t believe this statue is art, perhaps it’s the wrong body to be making the decision. At the very least, its members ought to get off their high horse and explain their rationale better.

READ MORE ABOUT THE HISTORY OF THE ROCKY STATUE