Sly leaks his backstory notes for a “Rocky Balboa” prequel 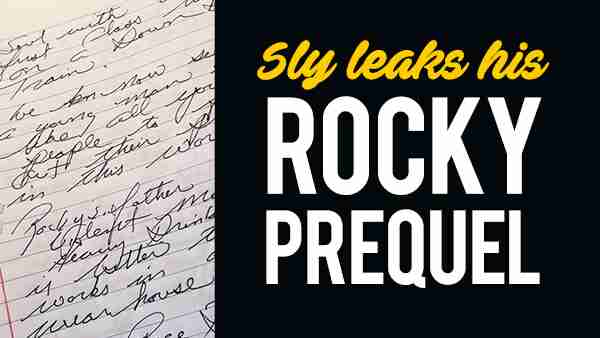 Sly posted an Instagram video on his official account showing off his favorite writing instruments, along with his working notes for what appears to be a “Rocky” prequel, giving a backstory to a young Balboa and his parents.

Though his video focuses on the epic custom pens neatly arranged on his writing desk, his roving camera work slyly (get it?) reveals his handwritten notes with character details on a young Rocky Balboa, his hard-drinking father and his mother, Rose.

“And without writing there would be no Hollywood … but what makes it fun quite often is what you write with. We all started out with a pencil but look what it’s evolved to -Montegrappa’s Works of Art!”

The notes reveal the following tidbits, probably taking place at some point in the 1960’s in the Rockyverse:

Soul with a first class ticket on a down bound train

Rocky’s father is a violent man; a heavy drinker is bitter that he works in a dock warehouse

Mrs. Rose Balboa mother is a woman who hates her husband and [birth]