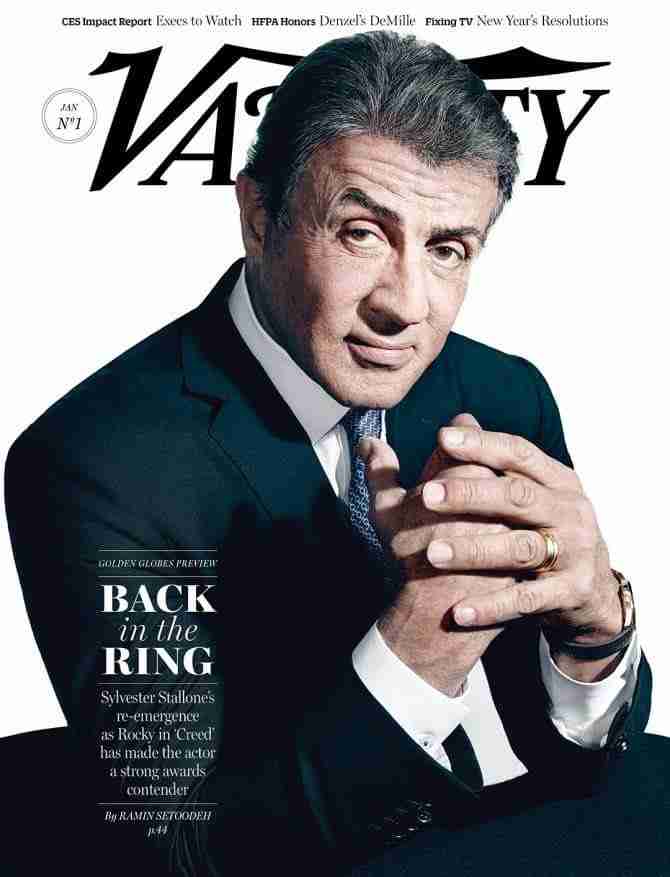 STALLONE IS BACK IN THE RING WITH VARIETY

Sylvester Stallone graces the cover of Variety this month and sat down for an in depth interview with the magazine. Click here to read it in full.

Sly discusses his recent acting nominations for his newest portrayal of Rocky Balboa in Creed, which has been gaining a lot of buzz about a possible sequel.

Gary Barber, CEO of MGM which financed Creed, says that “There’s no doubt that we’re making a ‘Creed 2,” although there are doubts as to whether scheduling will allow the film’s writer / director Ryan Coogler to return for a sequel.

“I know Ryan is probably going to be gone for a couple years,” Stallone says of Coogler’s hectic upcoming directing schedule. “So there will be a quandary on: Do we work with another director and have Ryan produce, or do we wait? There’s a diminishing time acceptance of a sequel. Now they are cranking them out in a year.”

Creed’s star, Michael B. Jordan, has stated that he’d like to appear in a second installment of the spinoff series, and Stallone and Coogler have already been toying with story ideas.

“You’ll have him face a different opponent, which I would say is a more ferocious, big Russian,” Stallone says of one of the more Ivan-Drago-esque storylines discussed.

“You can start to meld my experiences and then you start to bring different cultures into it. And you can see what’s happening with the Russians today in America. The complication will come with the girl’s ambition, because she’s not Adrian. She has places to go, things to see, the clock is running on her hearing.”

ROCKY REUNITES WITH APOLLO IN CREED 2

A second option has raised eyebrows in the Rocky community and involves a portion of the story taking place in the past, resurrecting Apollo Creed, who died in the ring in Rocky IV.

“Ryan has some ideas of going forward and backward and actually seeing Rocky and Apollo together,” Stallone explains in the interview. “Think of ‘The Godfather 2.’ That’s what he was thinking of, which was kind of ambitious.”

While certainly an exciting concept for for Rocky fans, it is unclear if Carl Weathers would be willing to reprise his most famous role, although he surprised many by attending Creed’s world premiere alongside Stallone in November, 2015.

The two actors evidently had a falling out during the pre-production of 2006’s Rocky Balboa, with many rumors swirling as to the exact cause of their disagreement, from Weathers requesting a role in the film despite his character’s death two sequels back, to Weathers allegedly demanding a large payment for the use of his likeness. Ultimately, even images of Carl Weathers from earlier Rocky films were not used in Rocky Balboa.

“So it’s going to be a CGI-version of Sly?” Michael B. Jordan says of this far-fetched concept. “I’m trying to think about it. Knowing Ryan, he’ll find a clever way to make that work.”

Though both Sylvester Stallone and Carl Weathers are in fantastic shape these days, its tough to see how a potential CGI reunion would come off convincingly on screen. Even though computer graphics have come a long way in recent years, let’s not forget the rather unconvincing CGI’d Stallone in his 2013 boxing film Grudge Match.