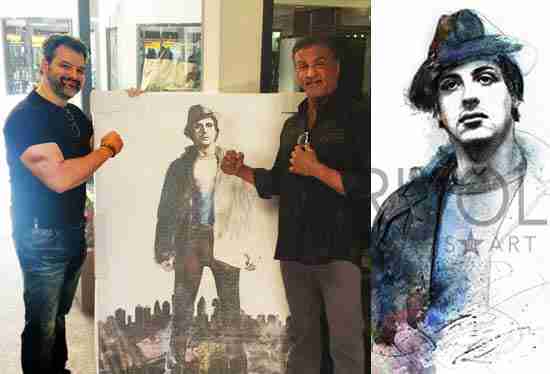 So, what’s it like meeting Sylvester Stallone, not as just a Rocky fan, but as a fellow artist standing on equal ground?

“I peaked. I didn’t know where to go from there.” That’s the memory of John Rivoli, a tremendously talented artist in multiple fields. And a guy who happens to be a huge Rocky fan.

“I remember calling my dad after that first meeting and saying, ‘Dad – I just had Rocky asking me questions about my art.'”

It came about when MGM had secretly arranged the mind-blowing meeting as a surprise to Rivoli who had been contracted to create a collection of Rocky-themed artwork in honor of the film’s 35th anniversary.

A multi-talented artist and designer, Rivoli and his wife run Rivoli Design Group, Inc., a New York-based design agency that works regularly with most of the major studios in Hollywood on everything from “Harry Potter” to “Wonder Woman.”

Guess who drew Spongebob Squarepants for the first ten years. Yep. John Rivoli. Check out his work next time you hit the post office – you’ll see his “Scooby Doo” artwork on a newly released stamp. 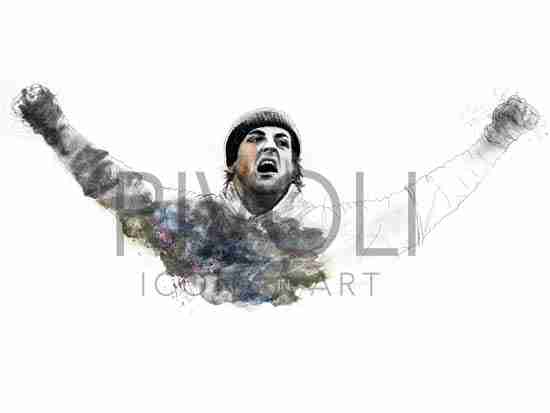 As an MGM regular, Rivoli made his love of Rocky known on one of his jaunts to the west coast studio saying, “If you do something with Rocky, you gotta call me!”

Ultimately, in 2011 MGM made that call. They suggested that Rivoli create a collection of Rocky-themed artwork to honor the film’s 35th anniversary. Plus, as a surprise, the studio planned for the artist to meet with Sylvester Stallone and show off his collection of Rocky pieces to the man himself.

“We looked through all the art and Sly was asking me things like, ‘How did you paint this?’ and ‘How did you get this texture?” Rivoli was – as most fans would be – in disbelief at the notion that he was having a conversation with Rocky Balboa, er, Stallone, about the artwork he’d created, based on the character that had inspired him since childhood.

“I saw the original Rocky as a kid and something inside of me immediately changed, and it’s been that way ever since,” he says. “I’m a Rocky guy.”

When the 40th anniversary of the film rolled around, so did Rivoli. “This is important, this is a real milestone,” he explained to MGM, “How many movies can say ‘We’re forty years old and we’re still relevant”? We have to do something.”

The studio agreed, and gave Rivoli the golden key to the Rocky Archives at MGM – a fan’s paradise. After gathering reference materials from never-before-seen photos, he flew back to his New York studio and began brainstorming on a program for Rocky’s 40th. Working through those images from the first film, pencil in hand, attempting to capture the grittiness of Philadelphia in the ’70s – that’s when his particular Rocky style developed. It’s a unique approach that art lovers are drawn to – especially Sylvester Stallone. 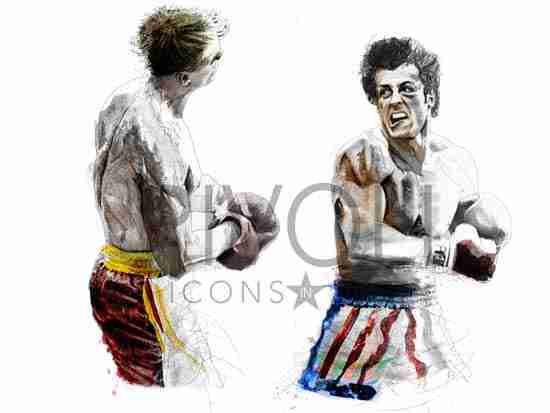 “MILLION TO ONE SHOT” – THE ICONS IN ART COLLECTION

Once the 35th and 40th anniversary Rocky art supplements were completed for MGM, Rivoli continued to have ongoing conversations with Sylvester Stallone about art in general, and art’s purpose in retelling the Rocky story.

“Then there was this epic moment when Sly approached me with an idea for a new piece of art,” Rivoli says, “Sly had a concept for a Rocky painting that catapulted the depiction of this iconic character in art to a whole new level. That’s because Sly’s concept wasn’t based on a slide or a still photograph or a recognizable moment in the film, but rather his singular vision with metaphorical messages and interpretive symbolism of the character’s journey.”

“Sylvester Stallone is a brilliant artist in his own right; he thinks, lives and breathes like an artist and his ideation to for this piece was a monumental example of this,” he says.

Eventually titled “Million to One Shot”, the painting depicts an imposing image of Rocky standing larger than life over the city of Philadelphia.

“I finished ‘Million to One Shot’, and Sly loved it when I presented it to him,” Rivoli recalls. “I told him – this is where our success lies – if you can come to me with the content because you’re a master storyteller, I want to fuse your words and my hands. I’ll do the art but you give me the story behind it. That’s the key to me, those two have to go together.”

Stallone’s reaction to the painting gave Rivoli the idea to ask MGM if he could become an official licensee to create Rocky and Creed art. MGM was very supportive and in January, 2019, the agreement became official, and the new venture, Icons in Art was born.

In April, Rivoli unveiled his new project, Icons in Art, an online gallery shop which sells fine art giclée prints of Rivoli’s officially licensed Rocky and Creed paintings; a fusion of Sly’s unique access to the mind of Rocky Balboa and Rivoli’s array of artistic talents and vision.

“Million to One Shot” hangs in Stallone’s home office, and now Rocky fans are able to purchase it, along with several other works including “Cold War”, “Gonna Fly Now” and “Round 10”, as gorgeous giclees and limited-edition signed pieces. (If you’re not familiar with giclees, think: The next best thing to the real canvas. Beautifully reproduced, faithful to the original.)

MEET THE ARTIST AND SYLVESTER STALLONE THIS SUMMER IN PHILLY

Icons in Art was just confirmed as an exhibitor at the upcoming Keystone Comic Con in Philadelphia, August 23-25, 2019. John Rivoli will be in attendance and will be signing and selling prints of the Rocky collection. Sylvester Stallone has also confirmed he will be attending this event in Philly. Icons in Art will be exhibiting again at the New York Comic Con October 3-6, 2019.

“I just pinch myself, because I’m so lucky that I’m the one guy this is happening to,” he says of his continuing collaboration with Stallone. “I explained to Sly that I want to give something back because he’s given me so much. So if I can continue Rocky’s story through art, then I’ve done my little piece for the Rocky Universe.”