Rocky V: Behind the Scenes

BEHIND THE SCENES ON ROCKY V

Filming in South Philadelphia began in mid-January, 1990 and John Avildsen, the director of the original Rocky was brought back on board to direct the fifth installment. Sylvester Stallone wrote the script for the film and was still in the midst of reworking things even as production began.

Rocky V picks up immediately after Rocky’s stellar performance in Russia as he battled Ivan Drago – and won. The Rocky V storyline is intended to flow seamlessly from the end of Rocky IV, however the passage of five years between the films and a number of other factors seriously affected V’s continuity and believability.

Talia Shire’s Adrian Balboa is noticeably different in appearance since we last saw her in Rocky IV, filmed only five years earlier. Her hair has nearly doubled in length from the last scene in Rocky IV, which makes for some confusion, as well as Adrian’s continuously tired and exhausted appearance throughout the film. This may be explained when it is understood that Talia was filming The Godfather: Part Three at the same time that she was filming Rocky V. Interestingly, her two most famous Oscar-nominated roles both produced a sequel in the same year and required her to work on both simultaneously – an extremely stressful situation for an actor.

Shire suffered from extreme jetlag as she flew from Philadelphia and Los Angeles shooting Rocky V over to Rome, Italy for scenes in The Godfather on a repeated basis. This unfortunate filming schedule took its toll on both of her famous characters, especially that of Adrian.

One of the highlights of Rocky V was the casting of Sylvester Stallone’s real-life eldest son, actor Sage Stallone in the role of Rocky and Adrian’s son, Rocky Junior. Sage made a wonderful addition to the cast and shares several sweet moments with his father throughout Rocky V. Although Sage was just 13 years old during the production of Rocky 5, his first appearance at the beginning of the film was yet another slight shock for fans who had just left off with Rocky IV and the memory of the young actor who portrayed Rocky Junior. “Rocky” Krakoff, who played Rocky Junior in Rocky 4 was only 9 years old and quite different in looks.

FILMING ON LOCATION IN PHILADELPHIA

Rocky V brought audiences back to the many familiar Philadelphia locations we first discovered in Rocky including Mighty Mick’s Gym, the pet shop, the Atomic Hoagie shop, the Italian Market, the “Rocky Steps” and Paulie and Adrian’s house where the destitute Balboas are forced to live after their fortune disappears.

While filming on location for six weeks, the production team was slowed by hundreds of local Rocky fans who swarmed the streets of Philly hoping to catch a glimpse of their hero. Hundreds of Philadelphia citizens were hired as extras for the film, including 12 year old Elisabeth Peters, who landed the role of Rocky Junior’s girlfriend.

Actress Jodi Letizia, who played tough-talking Little Marie in the original Rocky was supposed to reprise her role in this film in a brief scene. Her now-adult character was shown to have ended up just as Rocky predicted she would: a prostitute. The scene was shot and can be viewed in John Avildsen’s director’s cut of the film; it depicts Marie in a sad looking state huddled around a burning trash can in the street outside of Mickey’s Gym. The scene, however, ended up on the cutting room floor, although Jodi Letizia can be glimpsed during the street fight at the end of the film. Her character went on to play a major part in 2006’s Rocky Balboa when role was handled by actress Geraldine Hughes.

20 year old Tommy “The Duke” Morrison was a real-life undefeated boxer at the time he was cast as the bad guy in Rocky V and he went on to win the WBO Heavyweight Title in 1993. “I understand I’m being presented with an opportunity that comes along once in a lifetime,” Morrison said in 1989 after being cast in the film. “There are a million fighters out there who would kill to be in my position. But, at the same time, I don’t think I have or will be given anything I’m not capable of earning. It all comes down to this: Can I fight? Yes, I can. I know I can. Can I act? Well, I guess people will see for themselves when ‘Rocky V’ comes out. But I feel pretty good about it. I think I’ll do all right.”

Morrison was left in the hands of a pair of drama coaches who did their best to bring out the actor in the heavyweight fighter. “They were very patient and professional,” Tommy Morrison said of Richard and Leslie Brander. “Without them, I would have been lost.”

Director John Alvidsen was doubtful the coaches would have much effect on the 6’2″ brawler’s dramatic skills and thus they were originally hired for a brief time during pre-production and the first three weeks of filming, but had such success with Morrison that they were retained to help throughout the rest of the film, including working with Sage Stallone and providing critical feedback for both Sylvester Stallone and Talia Shire’s performances. “They were very much a part of the set,” Talia recalled of the acting coaches. “They were extremely collaborative and did not try to dominate.”

“It was a trial by fire for Tommy,” said Sylvester Stallone of Morrison’s experience working on the film. “The last thing he expected was that he would be the centerpiece of Rocky V. But the kid’s a natural actor.” Stallone was in fact so impressed by Morrison’s progress that he rewrote sections of the script to place more focus on Rocky Balboa’s relationship with his new protege.

Michael Anthony Williams played Tommy Gunn’s boxing opponent Union Cane and was also a real-life boxer. Hyped as “The Real Cane vs. Gunn Match”, a rumor abounded during the time of Rocky V’s release that Williams and Morrison were scheduled to have an actual boxing match, but the alleged fight was canceled when Williams was reported to be injured.

In Sylvester Stallone’s original script for Rocky 5, Rocky is killed during his brutal street fight with Tommy Gunn and dies in Adrian’s arms. The script reads:

A POLICEMAN SPEAKS: “The ambulance is a minute away.”

ADRIAN: “When you get to the hospital, you’ll be all right.”

ROCKY: “My hands are cold.”

ADRIAN (she takes his hands) : “I’ll warm them; Whatever you want.’”

ROCKY: “I don’t want the kid to see me like this.”

ROCKY: “Adrian, you’re the only thing I ever loved. I only want us to be happy, y’know?’”

ADRIAN (pregnant with a girl): “I know. When you get better we’ll go away for a rest and get ready for the baby.”

ROCKY: “I can’t wait to see my daughter. It’s gonna be great.”

An ambulance arrives and paramedics force their way through the crowd.

The scene fades and dissolves through the image of Adrian cradling Rocky’s head and fades in on the museum steps: Adrian stands beside the massive bronze statue of Rocky: Below her is a large gathering of press and friends.

ADRIAN: “Rocky Balboa passed away early this morning, and with my husband went a man who proved you don’t have to be born great to achieve greatness. From his humble beginnings, he became a symbol for many that life doesn’t make the man, the man makes the life. As long as there are people willing to meet challenges of life and not surrender until their dreams become realities, the world will always have their Rockys . (She looks at the statue) “I’ll always love you.”

The camera tilts up to the powerful statue and after a moment it dissolves into the same spot where years before an unknown fighter danced jubilantly and raised his hands in his victory over life. The scene freezes-on Rocky’s leap of triumph.

Throughout the bulk of the filming and post-production of Rocky V, it was planned that Rocky’s character was going to die in the end. “[In] the last scene of the movie, Adrian comes out of the hospital and there’s the world press assembled because Rocky then is a big deal and she announces that he is dead, but as long as people believe in themselves Rocky spirit will live forever,” explained director John Avildsen. “And when I read that I said, wow what a great way to go out. What a beautiful ending! So we started shooting the movie and a couple of weeks into the shooting I get a call from the head of the studio and they said, ‘Oh by the way Rocky’s not going to die. Batman doesn’t die, Superman, James Bond, these people don’t die’.”

Avildsen, and many involved in the production, believed that changing this crucial point of the Rocky V story put the nail in the coffin of the film itself. Rocky Balboa was saved, but Rocky V died at the box office. 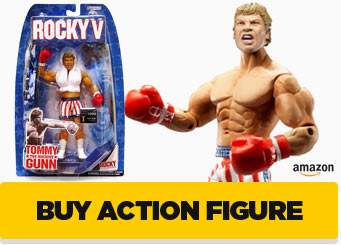 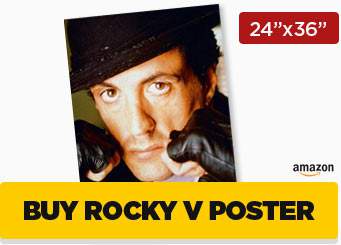 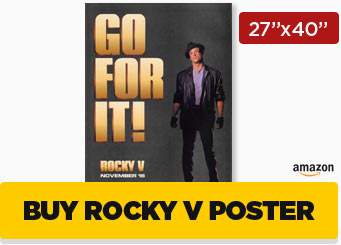 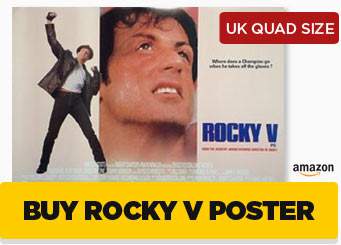