Behind the Scenes on “Rocky II”

BEHIND THE SCENES ON “ROCKY II”

One of the highest grossing films of 1979, the first sequel to the original Rocky was a blockbuster success. Sylvester Stallone took over as director on this film and began adding a few of his own directorial touches to the picture, all the while striving to maintain the look of director John Avildsen’s original.

Muhammad Ali on Rocky II: “A great movie. A big hit. It has all the ingredients. Love, violence, emotion. The excitement never dulled.”

The film picks up immediately after the ending of Rocky and Apollo’s match as the two fighters are brought to the hospital by ambulance and placed into wheelchairs. All four of the principal characters are noticeably different in appearance, despite the fact that filming took place only a little over two years after the original. Talia Shire‘s hair is longer (this happened again to a more detrimental effect in Rocky V), and Burt Young is dramatically slimmer. Young originally had no interest in revisiting his character of Paulie in a second installment of Rocky; in fact he’d reduced his weight to prepare for another film he was working on at the time, and when he finally agreed to participate in Rocky II, along came Paulie’s new streamlined look. So different was his appearance that Stallone even worked in a line of dialogue about it in the film.

Training, Sparring, and Running Through Philly

When Rocky spars in Mickey’s Gym with a smaller, quicker fighter – his opponent is real-life boxing champion Roberto Duran. In 1979, Muhammad Ali sat down with film critic Roger Ebert to watch Rocky II and commented on this scene: “What you see here, if you know how to look for it,” Ali explained, “is the difference between real fighters and actors. A real boxer can see Stallone’s not a boxer. He’s not professional, doesn’t have the moves. It’s good acting, but it’s not boxing. Look in the background. Look at that guy in the red trunks back there [Roberto Duran]. You can see he’s a real fighter.”

The tough spitfire Duran unleashed his serious punching power on Stallone during preparations for this scene, knocking Sly (who had spent considerable time undergoing boxing training) off guard.

“Stallone doesn’t have the moves It’s perfect acting, though,” Ali commented about the training scene. “The regular average layman couldn’t see what I see. And the way they’re painting the trainer is all wrong. Look at him there, screaming, Do this! and Do that! I never had anyone telling me what to do. I did it. Shouting at the fighter like that makes him look like an animal, like a horse to be trained.”

For Rocky’s training montage, he’s shown whizzing past a variety of Philly landmarks, wearing his trademark gray sweatsuit and Chuck Taylors as he trains for the big match. It’s been calculated that the montage shows that Rocky’s route – from his house to the steps of the art museum – would have had him jogging over 30 miles around Philly! Check out this detailed article which covers every step of Rocky’s route. Each year, a major 5K or 10K marathon is held in the city of Philadelphia called The Rocky Run, inspired by this famous scene of Rocky II.

As he ran, Rocky was tailed by groups of kids – in fact 800 local Philadelphia children were used as extras for Rocky’s inspirational training montage in which a chorus of children also sing an updated version of Bill Conti’s “Gonna Fly Now”.

“Now that’s one thing that some people will say is artificial, all the crowds running after him, but that’s real,” film critic Muhammad Ali said of this scene. “I had the same kinda crowds follow me in New York.” Some of the kids who run with Rocky were chosen from Visitation B.V.M. Catholic school in Balboa’s neighborhood of Kensington, Philadelphia. (As a sidenote, the interior of Visitation’s church was used as the setting of Rocky and Adrian’s wedding, although the exterior of another church was used in the film.)

An alternate ending for the movie was filmed but ultimately not used. In it, Adrian actually attends Rocky’s match against Apollo Creed and is swept into the ring to join her husband in victory. Still photos of Talia Shire being carried by Sylvester Stallone in the ring still exist, although footage has never surfaced. In the end, it was decided to show Adrian and Paulie at home with the baby, watching Rocky’s fight on television.

For the ending that DID make it into the final print, Sylvester Stallone recalled that he filmed ten different takes of the moment when Rocky wins the championship belt and lifts it over his head saying: “Yo Adrian, I did it!”. Stallone said the line confidently and victoriously on all but one take, when he decided to put a more emotional spin on the line. That is the version that made it into the film, making the ending of Rocky II one of the most touching moments in the series as Rocky shares his pride in such a heartfelt way with his wife.

Sylvester Stallone began writing the screenplay for Rocky III immediately after wrapping Rocky II; his original intention was for the films to be a trilogy and nothing more. 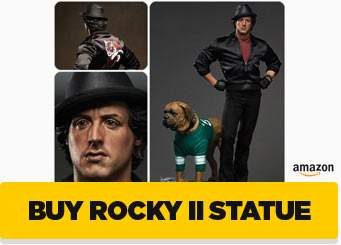 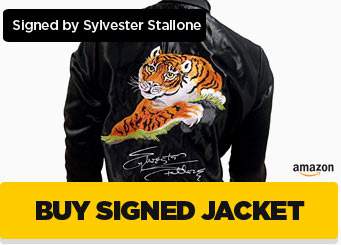