His Whole Life Was a Million to One Shot

The story of how the original Rocky was initially conceived and then brought to the screen rivals any plot ever hatched for a movie.

It’s creator, Sylvester Stallone remembers, “Early in my acting career I realized the only way I would ever prove myself was to create my own role in my own script. On my 29th birthday I had $106 in the bank. My best birthday present was a sudden revelation that I had to write the kind of screenplay that I personally enjoyed seeing. I relished stories of heroism, great love, dignity, and courage, dramas of people rising above their stations, taking life by the throat and not letting go until they succeeded.”

“But I had so many ideas in my head I couldn’t focus on any one. To cheer myself up, I took the last of my entertainment money and went to see the Muhammad Ali – Chuck Wepner fight on closed circuit TV. Wepner, a battling, bruising club fighter who had never made the big time, was having his shot. It wasn’t at all regarded as a serious battle. But as the fight progressed, this miracle unfolded. He hung in there. People went absolutely crazy. Wepner went 15 rounds and established himself as one of the few ever to go the distance with the great Ali. We had witnessed an incredible triumph of the human spirit and we loved it.”

“That night,” Sly continues, “Rocky Balboa was born. He is a man of the streets. People looked on him as the all-American tragedy, a man without much mentality and few social graces. But he has deep emotion and spirituality and good patriotism. And he has a good nature, although nature has not been particularly good to him. I have always seen him as a 20th Century gladiator in a pair of sneakers. Like so many of us, he is out of sync with the times. To all this, I injected doses of my own personal life, of my frustration at not getting anywhere.”

Going on a three-and-a-half day writing marathon, he produced a screenplay that ultimately reached the active and experienced producing team of Irwin Winkler and Robert Chartoff, knowledgeable filmmakers who, at the time, had already brought more than 25 films to the screen. They instantly sensed the magic in Stallone’s work, asked for a few rewrites and the negotiating began with a reported $75,000 offer.

“I can’t sell it outright,” the almost penniless writer-actor explained. “I wrote it for me and I have to do it.”

According the now familiar story, the price went up to $125,000. “I got a monumental headache,” Stallone recalls. “I didn’t know that much money existed. They kept insisting they needed a big name star, but the story was about not selling out, about having faith in yourself, about going the distance as a million-to-one shot.” The actors in consideration for the role were huge box-office draws: Burt Reynolds, James Caan, and Ryan O’Neal.

Stallone refused to sell unless Winkler allowed him to star – a longshot gamble that worked, and helped establish the million-to-one ethos that infused the entire production.  When the bid topped $300,000, Stallone said, “I would sooner burn the thing than have anyone else play Rocky Balboa. Not for a million dollars.”

Finally, a deal was made between Stallone, Chartoff-Winkler Productions, and United Artists. “It was a gamble, and a labor of love, with everyone taking much less than their regular salaries.” 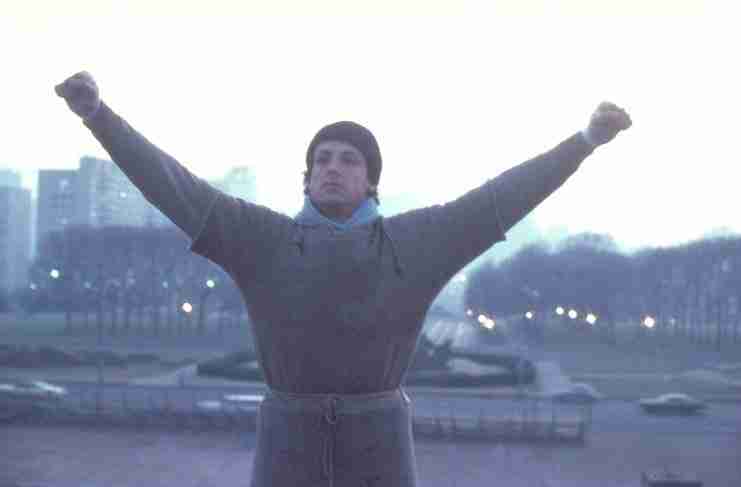 In a few months, the unknown actor was in Philadelphia, ready to start shooting what would be his first starring role, in a movie whose budget matched his lowly status. “I walked out of the trailer the first time in those cold streets of Philadelphia, they said, ‘Sylvester, are you ready?’ And I said, ‘No, but Rocky is.'”

For Stallone, the shoot was as tough as Rocky’s 15 rounds with Apollo Creed. “We didn’t have the money to shoot a normal union film at that time in Philadelphia, so we would travel in a van,” he says, and the film crew would jump out whenever director John Avildsen saw a colorful location. They were working with a new tool – Garrett Brown’s experimental Steadicam, enabling them to shoot moving objects in an exciting new way.

“John has me going up and down steps, through these curved corridors along the river,” Stallone said. “One thing about John is that he would use the environment. We’d see a ship along the river and he’d tell me to ‘jump out and run as fast as you can.'”

The training sequence, pulled together from sites all over the city, looks funny to Philadelphians, who recognize that it takes Rocky over a course of some 20 miles in a few minutes. To general audiences, though, the scene is a visual marvel – the Steadicam tracking shots were brand new, and Rocky’s journey is a sprint through an urban landscape that is uniquely Philadelphia – gritty, quaint, industrial, modern, colonial, and finally, atop the Art Museum steps, even beautiful. All backed by one of the great movie scores – Bill Conti’s classy brass sound, gladiatorial and stirring. The sequence is also enlivened by hundreds of ordinary Philadelphians, contributing spontaneous cameos. “He would have me. . .running down the street and people are throwing things at me. I had the orange thrown at me and people had no idea who I was. I was just some strange alien invader in a well-worn, tattered, baggy, incredibly ugly sweat suit running through their neighborhood, and they’re throwing things at me,” he said.

The movie had a budget of less than $950,000 and ran out of money quickly. A scene that was meant to feature 300 extras at an ice rink (when Rocky takes Adrian ice skating) ended up with Stallone and Talia Shire alone on the ice. And when Stallone admitted he couldn’t skate, he jogged gingerly alongside Shire, in what turned out to be one of the movie’s most touching scenes.

In the end, there was just enough film left for a final re-shoot of the ending, originally intended as just a long shot of Rocky and Adrian leaving an empty stadium hand in hand – an iconic image which ultimately became the shot used for the promotional posters. The film footage of the original ending was tragically destroyed by fire with no trace left for history but for several rare still photographs captured of these moments at the time of the filming. The unforgettable “Adrian!” “Rocky!” “Adrian!” finale was actually a last-minute addition, and there were so few people left that friends and crew had to crowd one corner of the ring to feign the appearance of a large mob passing back and forth in front of the camera.

There was no need to conjure up fake mob scenes when the movie opened. Test screenings showed that audiences loved the picture, and the crude promotional trailers released to the public created nationwide buzz around the little movie that could – “a movie for every nobody who ever needed somebody.”

The little below-radar movie, shot out of the back of a van on the streets of Philadelphia, was a monster hit ($117 million in bicentennial dollars), and an unlikely nominee for Best Picture at the Academy Awards.

On Oscar night, Rocky was a long shot again, against the favored Taxi Driver, Network and All the President’s Men, movies that captured New York and Washington, D.C., just as resonantly as Rocky captured Philadelphia. And Rocky not only went the distance, it won.

“I know I’ll never have a voice like that again, where I can just speak whatever I feel in my heart,” Stallone says. “That’s one thing I’ll always cherish about that character, because if I say it you won’t believe it, but when Rocky says it, you know it’s the truth.”