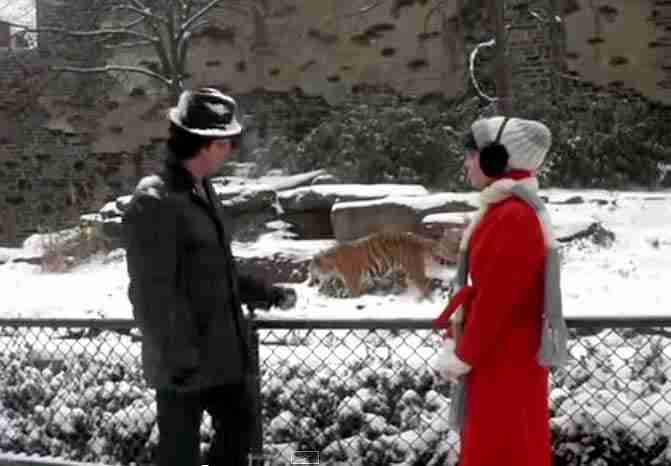 “I recently watched Rocky II, certainly one of the finest sequels ever, for the first time in many years and thought the readers on Total Rocky might be interested in some information on the biggest character in the famous marriage proposal scene at the Philadelphia Zoo.”

The gorgeous tiger that can be seen handsomely walking in his enclosure behind Rocky and Adrian in the proposal scene which was filmed at the Philadelphia Zoo. “He was a famous Siberian Tiger (nowadays called an Amur Tiger) named Kundur (sometimes misspelled Kundar in the press), and he was born in the Leipzig Zoo in 1970 and came to the Philadelphia Zoo the following year. He was one of the largest tigers ever exhibited at the zoo, and in his prime weighed in the neighborhood of five hundred pounds. He received 18 lbs. of meat daily. He was very fond of certain keepers, although not of everyone. He was a great favorite among zoo visitors.”

“I was privileged to be one of the cat keepers who cared for him in his prime (that’s me in the photograph with Kundur above). I was working in the Reptile House on the day of the filming – which brought an unexpected snowfall – and I did not get to meet the stars.

“As for the zoo scene, the reason there are no other people in it isn’t because the film crew cleared everybody out for the filming but simply because there were few (if any) visitors to the zoo that day. As I recall, it took most of the day to film the scene. One of the oddities of it is the presence of all the vehicles belonging to the film crew parked in the background of the initial zoo shot. As anyone who has been to the zoo knows (and that’s millions of people), that’s the main walkway for the public near the two outdoor cat grottoes, and one never saw cars crammed in there. It always struck me as odd, since the crew was there all day, that they didn’t bother to move them but left them carelessly cluttering the background of the shot.

Kundur the Tiger in “Rocky II”

Kundur was chosen for the scene because he was the largest of our tigers and would look great onscreen. The fact that it was snowing that day and that he was a Siberian Tiger was another bonus.

In 1983, when Kundur was thirteen, he was euthanized because of incurable cancer in his jaw. (Click here to see Kundur’s obituary.) He had great affection for me and I for him. The photo of us was taken by my good friend, Keeper Danny Christmann, in 1976. Hope you find these details of interest.”