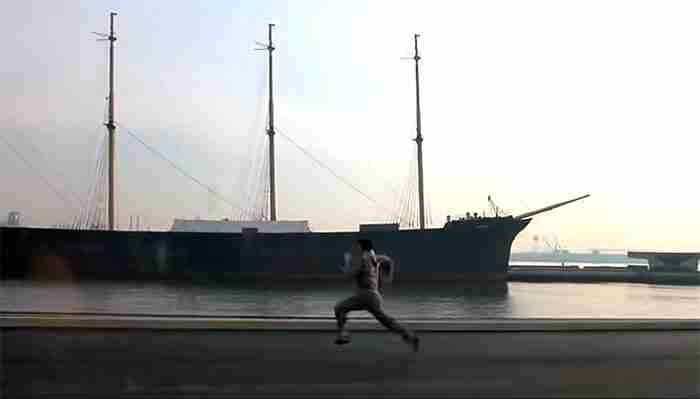 In one of the highlights of the original Rocky training montage, Sylvester Stallone is seen running along a dockside with a ship in the background.

The Rocky director’s commentary remarks that the crew riding alongside Sly in a van where shocked at the incredible burst of speed he was able to put on for this moment when Bill Conti’s score hits a high point.

That ship still exists today, and is now an elegant floating restaurant in Philadelphia offering upscale seafood and steak dinners.

The ship is currently docked along the Delaware river near other famous ships but this is not the exact same location where the ship was docked in 1976 during the filming of Rocky’s training montage.

In the 1970s, ship was still docked along Penn’s Landing in Philadelphia, so it’s likely that Rocky can be seen running north along Christopher Columbus Boulevard.

Moshulu opened as a restaurant in 1975 just a year prior to Rocky’s production, and holds another claim to fame for its appearance in The Godfather: Part II during young Vito Corleone’s coming to America sequence.