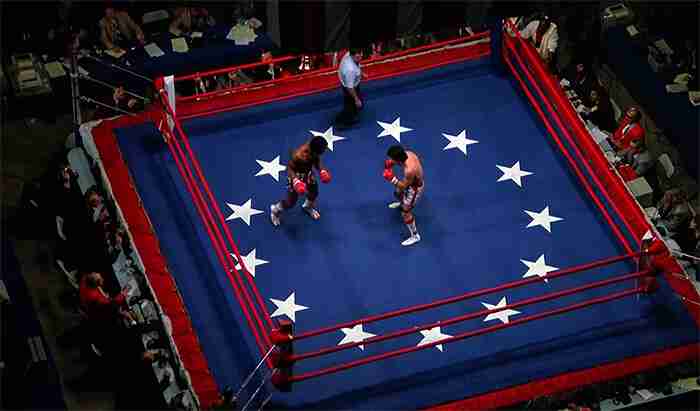 “You wanna go to a basketball game?”

Since 1967, the Spectrum (later called Wachovia Spectrum) opened its doors to thousands of events.

From major sporting events to landmarks in entertainment history such as Elvis Presley’s last live performance and concerts with Luciano Pavarotti and Frank Sinatra, the Spectrum was to Philadelphia as Madison Square Gardens was to New York.

In the Rocky movies, this arena hosted both of the Balboa vs. Creed boxing matches and for years afterward, was the real-life home of the famous bronze Rocky statue which has since been relocated to the Philadelphia Museum of Art.

During their courtship, Rocky offers to take Adrian to a basketball game at the Spectrum.

In 2011, the Spectrum was demolished roughly a year after it held it’s final event, a Pearl Jam concert.

Where the actual Rocky fight scenes were filmed

In actuality, the interior arena scenes for both of these fights were shot across the country in Los Angeles – the first match was filmed in downtown L.A. at the Grand Olympic Auditorium (located at 1801 S. Grand Avenue, Los Angeles, CA 90015).

The Grand Olympic shut down in the 1980s, though the building is still there and is today a Korean church. In its heyday the Grand was a hot spot for sporting, theatrical and entertainment spectacles and has been used as a filming location for many films and television shows.

← The Philadelphia Museum of Art Independence Hall →
Back to other locations