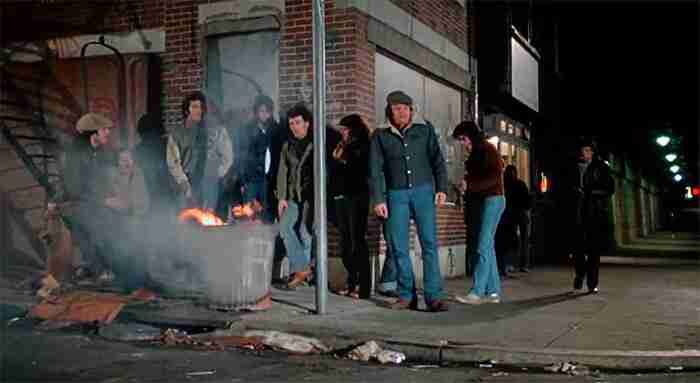 What a great song, it hits at the heart of all things Rocky. Performed and composed by Sly’s musically talented brother, Frank Stallone, “Take You Back” is heard in every single Rocky movie except for Rocky IV.

First seen at the beginning of the original film, the building that Frank Stallone and fellow singers are standing next to when Rocky is on his way home has been gone since the time of Rocky II.

While the corner is obviously still there – located at the southeast intersection of Kensington Avenue and Tusculum Streets – there’s been a vacant lot in the spot where that building stood for over 40 years.

In 2019, the city stepped up and renamed this little corner Tusculum Square, cleaning up the homeless encampment and planting trees and grass to pretty up this dirty and dangerous area. What’s cool is – the red fire hydrant and crumbling sidewalk that still stand today are the same ones that can be seen in the movie.

Walk just a few houses down from this corner and you’ll end up at Rocky’s apartment.

Frank and the gang were next seen and heard in Rocky II, after the wedding scene, when Rocky carries Adrian home from the church.

The singers, AKA “The Neighborhood Juke Box”, stood around a bonfire in a tiny space between two buildings and performed “Two Kinds of Love”.

This space is still there, and looking outward from it, you can still see the same brick house with steps that appeared behind Rocky and Adrian on their wedding night.