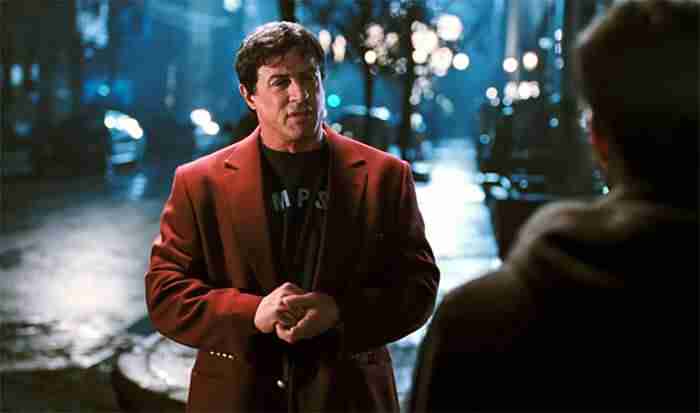 Considered the most inspirational speech in all the Rocky movies, Rocky Balboa’s message to his son Rocky Jr. was delivered at a side street just outside Adrian’s Restaurant (in real life, The Victor Cafe) at the corner of Dickinson and Clarion Streets.

Sylvester Stallone and Milo Ventimiglia stood just steps away from the entrance to Adrian’s Restaurant for this motivational scene. The area looks the same today as it did in 2005 during the filming of Rocky Balboa.

Script of Rocky’s entire speech to his son

And you grew up good and wonderful and it was great just watching you every day was a privilege.

Then the time come for you to be your own man, and take on the world, and you did. But somewhere along the line, you changed. You stopped being you. You let people stick a finger in your face and tell you you’re no good. And when things got hard, you started looking for something to blame. Like a big shadow.

Let me tell you something you already know. The world ain’t all sunshine and rainbows. It’s a very mean and nasty place and I don’t care how tough you are, it will beat you to your knees and keep you there permanently if you let it.

Now, if you know what you’re worth, go out and get what you’re worth – but you gotta be willing to take the hits. And not pointin’ fingers sayin’ you ain’t where you want to be because of him or her or anybody. Cowards do that and that ain’t you! You’re better than that.

I’m always gonna love you no matter what. No matter what happens. You’re my son and you’re my blood. You’re the best thing in my life. But until you start believing in yourself, you ain’t gonna have a life.