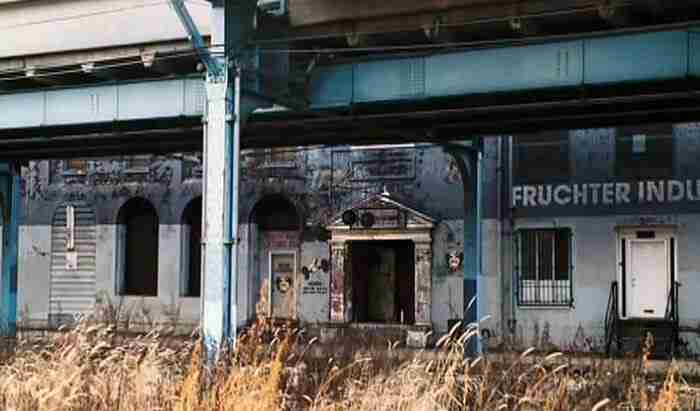 When Rocky decides to accept the exhibition match with Mason “The Line” Dixon, the old crew gets together at an abandoned looking gym in South Philly to begin training.

Though the interior scenes of the gym training were shot elsewhere, the establishing shot for the gym was shot on location in a bad neighborhood in Philadelphia.

The movie crew added a sign, South Philly Lifting Club “No Limits” out front for the movie, along with a hanging barbell and a pair of old shoes.

In 2012, a fire destroyed the vacant 19th century building and a totally new structure has taken its place next to the El. There’s really nothing left to see there today.

“So what we’ll be callin’ on is good, old fashioned blunt force trauma. Horsepower. Heavy-duty, cast-iron, plow-drivin’ punches that’ll have to hurt so much they’ll rattle his ancestors. Every time you hit him with a shot, it’s gotta feel like he tried kissin’ the express train.”