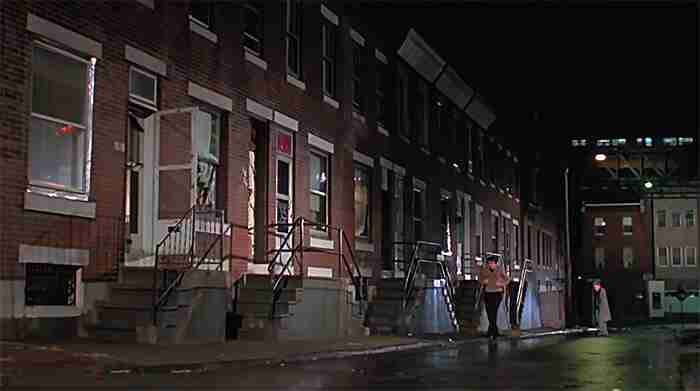 On the southern end of Tusculum Street you’ll find the narrow brick front address where Rocky Balboa lived until early 1976 – hey, he said it was only temporary.

This Kensington, Pennsylvania neighborhood apartment was the first home that Rocky and Adrian shared (Butkus, too!), and where they spent their wedding night in Rocky 2.

The building itself dates to 1920 and during the 1970’s was owned by Eleanor O’Hey; O’Hey was paid just $50 for the use of the exterior of her home during the filming of the original Rocky due to the film’s low-budget.

By the time Rocky II rolled around following the blockbuster success of the original, the production company upped the price to $500 for the rights to film outside. (Click here to read an interview with 1818’s owner.)

While Eleanor O’Hey remembers the production crew using her living room as the setting for the interior of Rocky’s apartment, the film’s producers recall that the scenes inside the apartment were shot across the country at a real flophouse in Los Angeles.

As the story goes, the genuinely run down room had a view of California palm trees outside the windows and the crew had to roll in a Hollywood fascade of a brick wall to disguise the trees. This necessity had the happy outcome of creating an even more dismal atmosphere in Rocky’s house.

The bathroom in the movie was also a real one, and was reportedly disgusting, which helped fuel Sylvester Stallone’s dramatic scene with Burgess Meredith in which Mickey comes to Rocky’s apartment to ask him to take him on as his manager.

Rocky’s bathroom monologue that ensues was ad libbed by Stallone – his shouts of “it stinks!” become incredibly understandable considering the stench in that little bathroom.

The location of the Los Angeles interior of Rocky’s apartment is as yet unknown.

Robert Plazek’s Travel Tip: “It’s difficult to comment on, but the day we visited 1818 Tusculum Street, we felt a little intimidated by a couple of residents and we hadn’t even turned the car off yet.

As this is a residential area, we parked the car away from the apartment and took a few quick photos but without getting too close – like sitting on the steps. The apartment remains very true to its 70’s look.

If you head towards the end of the street and look to your left you’ll see the spot where Frank Stallone sang as Rocky carried Adrian home after their wedding.”