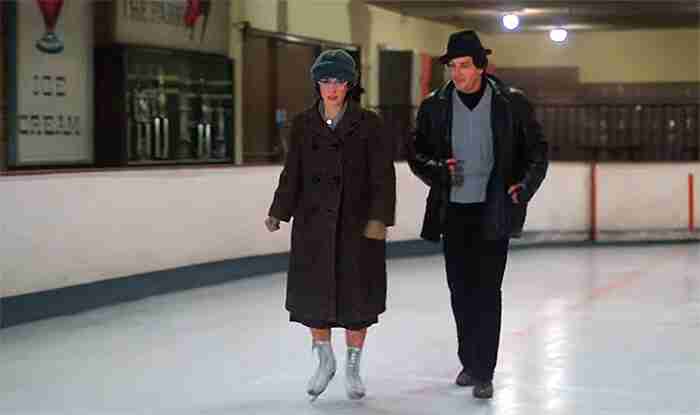 In Stallone’s original Rocky script, the famous ice skating scene called for the ice rink to be humming with dozens of other skaters that Rocky and Adrian would glide through, but due to the film’s dwindling budget, the production was forced to film in a completely empty ice rink.

What seemed a problem at the time turned out to be the makings for one of the most memorable and romantic scenes in the entire series.

Rocky’s original ice skating rink was located in Santa Monica, California, and was during the time of the filming a very popular local rink used by Olympic athletes during training as well as the general public.

Ice Capades Chalet was fairly new at the time and the interior of the ice rink wasn’t much altered for the scene – what you see on film is how it actually looked to the public in 1975. Some panels at the far end of one wall and the “Philadelphia Blades” banner were the only set decorations added by the film crew.

Patrons who used the low-ceiling rink in that era say it was a fun place to skate because it gave the impression of skating outdoors. When Sylvester Stallone, Talia Shire and the production crew began shooting on the ice, some customers were disappointed to arrive and find their time on the ice cancelled that day. Instead, they were allowed to watch portions of the filming of one of the greatest moments in the Rocky movie series.

When the Chalet was closed down in 1985 it was purchased by the Fred Segal store (an upscale clothing company), and incredibly, the building was not demolished. It stood until the 21st century, packed with a maze of cubicles and high end clothing, but Rocky fans could immediately recognize the original low-hanging frosted ceiling.

The entry doors and area where Adrian stood when Rocky said: “I’m gonna smooth this guy” were still there, though highly renovated and altered to a degree, as were the original ramps and railings leading down a few brick steps to the landing where the ice was originally situated. The building was put on the market in 2018 and ultimately demolished in 2019.

Just a few minutes’ drive from here is the Santa Monica Bodybuilding Center, a small and out-of-the-way gym that Sylvester Stallone trained in for years up through the filming of Rambo 3 (1987).

The empty lot that Rocky and Paulie visit on that cold night of remembrance in Rocky Balboa is NOT the same ice rink location.