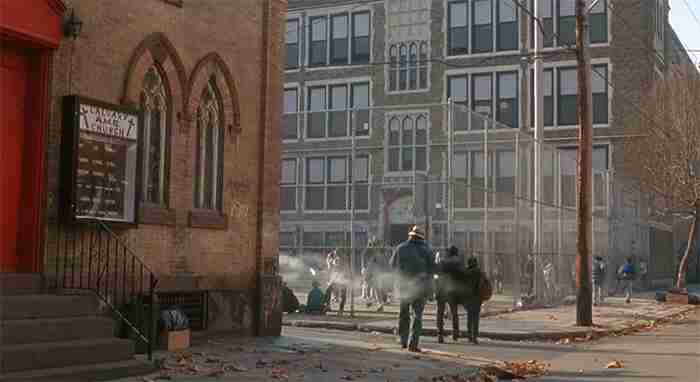 Time to go to school, son.

This real elementary school called Kirkbride is located in Philly’s Passyunk Square neighborhood. Rocky tells his kid that he used to go to this school, probably in the 1950s, saying it was “real tough then”.

Its official address is 1501 S. 7th Street, but who cares, we’re not mailing it a letter – here’s a couple of Rocky-specific street corners we wanna look at.

If you’ve got a minute to amble down Dickinson Street heading West, that’s the way Rocky and Paulie walk the kid to school on his first day.

Check out the Cavalry AME Church, whose little sign looks just the same. The schoolyard’s chain-link fence remained broken in nearly the same spot where Robert climbs through for many years but was finally repaired sometime after 2011.

If you’re looking for the spot where Robert / Rocky Jr. fought that other kid to get his jacket back, it’s on Marshall too, just sort of around back of the school.

After he wins, Robert and the girl run South down Marshall Street, which is actually the opposite direction from the way he walks home, but whatever.

Careful out there, kids, these streets are tiny – don’t get hit by no cars.

← Mr. Gazzo's Street 'No Easy Way Out' Tunnel →
Back to other locations