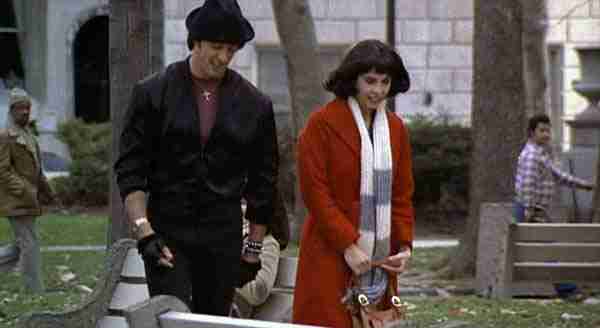 “We could give her singing and dancing lessons…”

Rittenhouse Square, just a few blocks from Philadelphia’s City Hall, is the city park that Rocky and Adrian walk through just after they leave the doctor’s office with the news that they’re going to have a baby.

The Square is a beautiful, lush and popular spot nestled among the throng of giant downtown buildings.

Named in honor of Philly’s own Revolutionary war patriot David Rittenhouse in 1825, the park soon found itself in the center of the most fashionable neighborhood in the city.

The present layout of the square has dated since 1913, in which the walkways run diagonally through the small park and meet in the center. Many of the bronze statues here date from this period in the early 20th century.

In Rocky II, Rocky and Adrian stroll along the southeast corner of the square, heading more or less south, and closest to the intersection of 18th Street and Locust Street.

If you need to find the exact path they walked, just look for the fascade of the elegant Barclay Condominium (“I never use ’em”). This stone-fronted building is seen just behind the Balboas when they stop to face each other.

During the filming of this scene, the Barclay had a green awning over it’s front entry way. This has since been removed and replaced with a far more majestic, upscale frontage.

Also – according to a 1979 interview, Stallone actually stayed at the Barclay Hotel in between filming of Rocky II and Rocky III.