Used as the site of Adrian’s grave in Rocky Balboa, and later as Paulie’s final resting place next to his sister in Creed, this old and revered cemetery is the final resting place of many a famous name – including one of the signers of the Declaration of Independence.

After the filming, the production crew left Adrian’s heavy granite grave marker behind at the cemetery and since then it has actually been publicly displayed on the grounds. The stone, now covered in green moss, is so realistic that many visitors have mistaken it for the real thing! (Don’t worry, Talia Shire is doing just fine.)

A lightweight styrofoam version of Adrian’s headstone as seen in Rocky Balboa was kept in Sylvester Stallone’s private collection until December, 2015 when it was auctioned for $4,000.

Also included in the Stallone auction was the wooden folding chair that Rocky keeps in the old tree near his wife’s grave; a different version of the chair was used in Creed.

Sadly, in the spring of 2016, “Rocky’s tree” was torn out of the cemetery due to deterioration. In fact, the entire tree was gutted and sat on the grounds rotting until it was determined that it best be removed.

For the Creed production, a styrofoam version of Paulie Pennino’s grave marker was created by the studio prop department and placed on the grounds. Adrian’s granite marker was hauled from its usual spot near the office over to sit with Paulie’s headstone for the scene in which Rocky reads the newspaper to his dead wife and brother-in-law.

How to Find Adrian’s Burial Plot

Laurel Hill is aware of the many Rocky fans who journey to the cemetery in search of Adrian’s grave. Thankfully, they’re nice enough to have created a special area just for fans of Talia Shire’s character. You can find Adrian’s gravestone sitting near the main office, and many cemetery visitors stop by on their way out to see the movie prop before departing.

If you’re looking for the place where Adrian and Paulie’s graves appear in the movie, it’s become a bit more difficult since Rocky’s tree – once an easy-to-spot landmark – was removed.

The exact grave location used as Adrian’s plot is actually occupied by General Pemberton, the only Confederate Civil War General buried in this cemetery. Pemberton’s headstone faces the opposite direction to where the movie cameras were focused, and Adrian’s prop headstone was placed in front of the General’s real one during filming. Ask the office where General Pemberton is buried, and you’ll find Adrian’s spot!

Tip from Eric Smith: “Adrian’s headstone is near the front gates. Rocky’s chair was also kept in the tree for a while. The crew had bolted it to the tree for some final shots, but it was taken down due to wear and tear from the weather.” 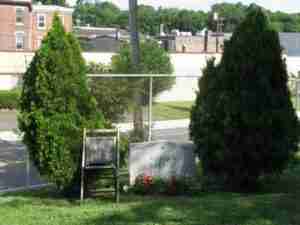 Adrian's headstone, the famous tree, the view... and where the headstones sat for filming. #rocky pic.twitter.com/ofhYruqvrp 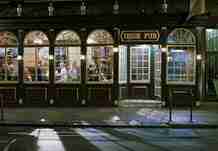