Collecting at the Philly Docks 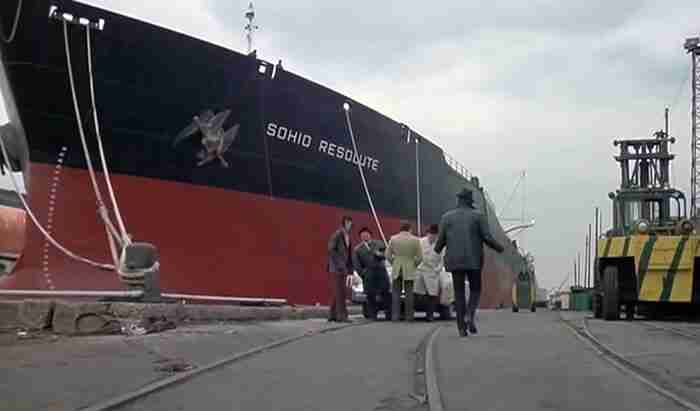 We’re first introduced to Rocky Balboa’s tough outer shell but kind heart in this early scene in the original movie. Rocky’s out on a collecting job to get Mr. Gazzo’s $200 from Bob, a dock worker. (We know Rocky shoulda broken the guy’s thumb for being short $70, but hey.)

As he enters the scene, Sylvester Stallone walks past a mighty oil tanker, the Sohio Resolute, a ship built in 1971 and scrapped in 1993. The ship happened to be docked here and was immortalized in this Oscar winning movie.

Visible in the hazy background for just a second are the towers of the Benjamin Franklin Bridge which crosses the Delaware River.

We believe this scene was shot along Pier 24 (or possibly one of the two neighboring piers), which today is still there and usually empty, serving as a parking lot. From there you can see the river and the Ben Franklin Bridge.

This scene illustrates a great Balboa life lesson – you shoulda planned ahead.

Tip: These docks are directly across the street from the old railroad yard where Rocky jogs holding a pair of bricks in the series’ very first raining montage.