“How the hell can we train in dis creep joint here?”

Pushin’, gettin’ ready for the fight! This historic Philadelphia hotel was used as the exterior façade for Rocky’s palatial gym in Rocky III. Only the exterior establishing shot of this scene depicts the Bellevue Stratford – now called Hyatt at the Bellevue.

Fronted along Philadelphia’s Broad Street, Rocky actually would have run right past the Bellevue during his very first early morning run in 1975 when City Hall is visible in the background.

The interiors of the “Pushin'” scene were actually filmed at another historic hotel, but over in Los Angeles at the Millennium Biltmore Hotel in downtown LA. (506 S Grand Ave, Los Angeles, CA 90071). The hotel’s Crystal Ballroom was transformed into a gym, complete with a boxing ring, and loaded with Rocky merchandise.

Now a popular wedding and event venue, the famous Crystal Ballroom got its first claim to fame in 1927 when the Academy Awards were founded right there in the ballroom. The stunning room is decorated with a hand-painted 30-foot ceiling, carved columns, gold mirrors and balconies – all of which can be glimpsed in Rocky III. The ballroom looks even more breathtaking today! 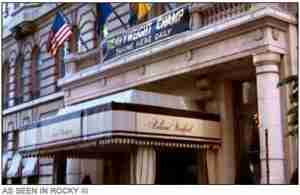 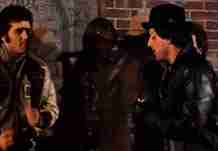