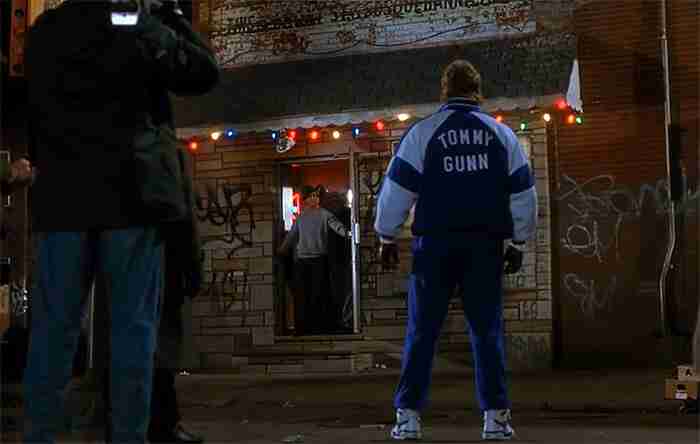 This bar is right across the street from Mighty Mick’s Gym – in fact, when Rocky’s out in the street showing Tommy Gunn who’s boss, Mick’s sign is visible in the background.

It’s really a pizza joint called Stelio’s which has been operating at this location since the 1970s. Inside the restaurant are a few snapshots of Sly during the filming of Rocky V.

The interior scenes of Andy’s Bar were filmed inside, though it looks a lot different inside the restaurant today.

Note that this is not supposed to be the old Lucky Seven Tavern seen in Rocky and Rocky Balboa, even though deep down, we all kinda assume it is.

This little corner is Rocky Mecca for fans – when standing at this spot, you can see not only Andy’s Bar, but Mighty Mick’s Gym and the former location of Adrian’s Pet Shop (demolished in 2017).

← Trans Am Car Dealership Lucky Seven Tavern →
Back to other locations