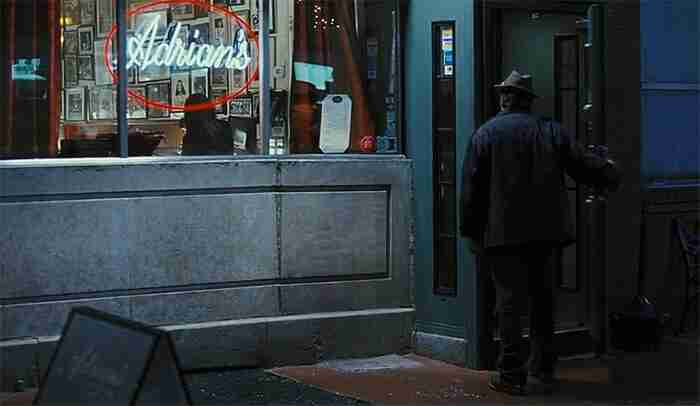 Maybe Apollo Creed’s cheap shot about Rocky’s Italian heritage actually had some truth to it.

Adrian’s Restaurant is a real eatery in Philadelphia called the Victor Cafe. Located near the intersection of Dickinson and 13th Streets, this intimate Italian restaurant opened in the 1918 and quickly became South Philly’s shrine to opera due to the DiStefano family’s love of music and their impressive collection of operatic recordings, photographs and memorabilia which decorate the walls of this charming Italian restaurant.

In January, 2006, Victor’s was outfitted as both the fascade and interior of Rocky Balboa’s Italian restaurant called Adrian’s Restaurant, named after Adrian Balboa, whose pictures appear on the wall’s of the restaurant in the movie, alongside photos of Rocky Balboa’s boxing career highlights and real-life operatic portraits which are permanent fixtures in Victor Cafe.

Although it is not actually referenced in the movie, we can assume that Rocky and Adrian opened the Italian restaurant together – guess that proves that Adrian’s spaghetti really was good!

Adrian’s Restaurant, according to its signage and menu, was established in 1995. In Balboa, we see Rocky himself shopping for the restaurant’s fresh food at Philly’s Italian Market, the same place where he used to take his morning jog in Rocky and Rocky II.

Owner Greg DiStefano has put together a fascinating read about how Victor Cafe was chosen by the Rocky Balboa production to appear in the film back in 2005. (Click here to read the story.)

DiStefano explains that Sylvester Stallone liked the vibe of his restaurant so much that the production decided to incorporate more of the Cafe’s music and opera decor into Rocky’s fictional restaurant than was originally planned.

WHY ROCKY BALBOA OWNS A RESTAURANT

The concept for Rocky actually owning a restaurant was based on real-life boxing legend Jack Dempsey.

In the 1930’s, the world heavyweight champion opened a restaurant in Manhattan, New York. Dempsey himself was present at the restaurant on most nights playing host to his guests, signing autographs and telling stories from his boxing career – just as Rocky does in Rocky Balboa.

Dempsey’s memorable neon sign even made a quick appearance in The Godfather (1972) in the scene in which Al Pacino’s Michael Corleone waits out front to be picked up by Sollozzo and McClusky. Dempsey’s Restaurant closed in 1974.

It is because of this Jack Dempsey connection that Rocky Balboa is seen wearing a navy blue shirt with large white letters reading DEMPSEY across the chest beneath his wine-colored sport coat when he works at Adrian’s Restaurant. (Click here to read more about Rocky’s clothing.)

Robert Plazek’s Travel Tip: “Victor Cafe is located in a quiet residential area and was closed the day we visited. As you stand facing the front, walk to the left and around the corner walk a few steps and you will see the back of the restaurant featured in Rocky Balboa.

The restaurant inside looks as it does in the movie, although it is minus the boxing themed walls.”