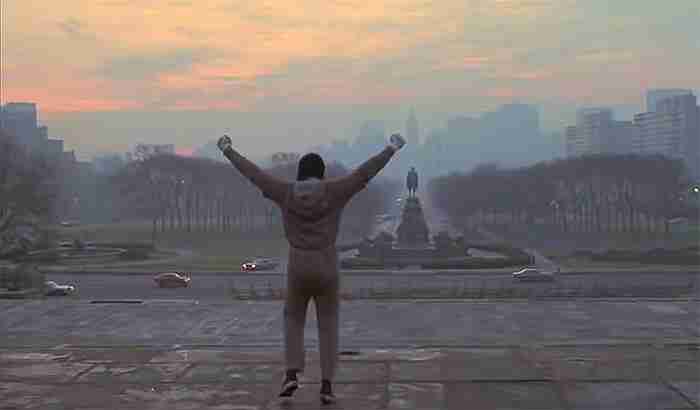 “These steps get longer every year.”

To prepare for his match against Apollo Creed, Rocky Balboa began a training regimen of early morning runs through the streets of South Philly that culminated atop the steps of the Philadelphia Museum of Art.

As Rocky finished running up the Museum’s 72-step entrance, he raised his arms in triumph – creating one of the most iconic images in cinematic history. Since then, millions of visitors to Philadelphia have climbed the stairs and raised their arms in tribute to Rocky, many of them, like Rocky, unaware of all the beautiful artwork that lies inside the museum itself!

Popularly referred to as “The Rocky Steps”, the Philadelphia Museum of Art was built in 1876 yet didn’t establish some recognizable portions of it’s memorable look until the early 1930’s when its one and only pediment depicting sculptures of Greek deities was completed.

These architectural works of art are highly visible in the Rocky movies.

At the top of the steps, you’ll find the bronzed soles of Sylvester Stallone’s Converse sneakers set in the cement, along with an imprint reading “ROCKY”. Sly has visited this spot and has stood in the bronzed footprints.

This location is perhaps the most famous Rocky spot of all and was used in every single Rocky movie in the series except for Rocky IV – though, if you wanna get technical, the steps DID appear in Rocky IV if you count its brief appearance in Sly’s directors cut, Rocky vs Drago (2021).

In 2014, fans were stirred by a news report that plans were being made to physically alter the face of The Rocky Steps to make way for a new art exhibition that would effectively obliterate a good portion of the steps as we know them from the Rocky movies. Thankfully, as yet, the plans never went through and the museum steps currently retain their on-screen appearance.

The museum itself is one of the largest in America and holds a collection of world-class art and artifacts. Running up the Rocky Steps is free; admission to the art museum is $25 (as of 2021).

Where to See the Rocky Statue

If you’re lookin’ for the bronze statue of Rocky (first seen in Rocky III), you’ll find it in the museum’s nearby garden toward the base of the steps, where it was dedicated by Sylvester Stallone in 2006.

Sly visited the the Rocky Steps and Rocky statue again in January, 2015 as the filming of Creed began in Philadelphia; in doing so he created quite a media buzz when he took a selfie with some surprised young men who had just made the run up the steps only to find Rocky Balboa himself at the top.

← Mighty Mick's Gym The Spectrum Arena →
Back to other locations