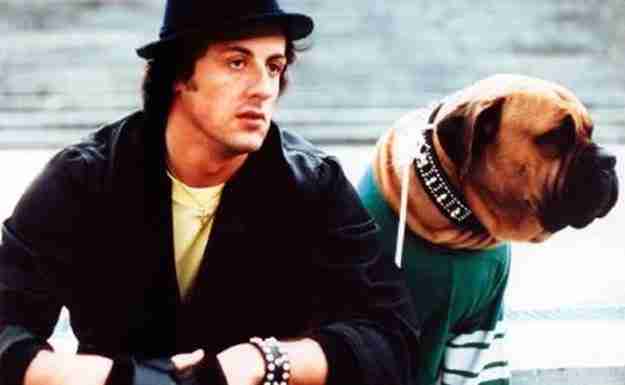 Butkus the dog appeared alongside Rocky Balboa in the original “Rocky” and again in “Rocky II”; the large Bull Mastiff was actually owned by Sylvester Stallone in real life. Here’s his story …

When a person chooses a monstrously large dog canine for a traveling companion on a cross-country flight, traditionalists aboard might feel some explanation is in order. Sylvester Stallone was happy to oblige as he and his 140-pound bull mastiff settled down for a trip to Philadelphia.

“Butkus and I had some lean years together,” said Stallone, recalling the dog whose airfare cost a small fortune. “I kept promising him that if we made the big time, he’d always go first class. “In the original Rocky script,” Stallone he says, “Rocky owned a scruffy ‘fleabag.’

“I was surprised that a scruffy animal ‘fleabag,’ trained and for rent to movie companies, did not come cheaply. Since our budget didn’t allow even for a feeble hamster, much less a trained dog, the producers asked if I happened to have a beast of my own. I responded that I had a thing called Butkus, a throwback to the Stone Age. I talked the proposition over with Butkus, who promised to give it his best shot. Unfortunately, a few days before his acting debut he took a nap on a wet carpet and one side of him turned red. We couldn’t use a two-toned beige and red dog, but fortunately he finally came clean.

The little puppy joined the Stallone family in 1969. “We got him when he was about six weeks old,” Sly says.

“He was a ferocious-looking little devil and when he ate his security blanket we decided to name him after Dick Butkus, possibly the fiercest football player in history. We became very well acquainted, because in addition to me, there was my wife Sasha and another giant dog, all living in the third tiniest apartment in New York.

Stallone laughed at the mighty dog’s antics at the time: “Since those New York days, Butkus has done something mind-boggling an average of once a month. He has a penchant for attacking giant bottles of spring water. He once broke one and damaged two apartments in the process. I think it’s the blue cap on the top he’s after. We don’t dare leave him alone with bottled water.”

Stallone adds, “On our way from New York to Hollywood to seek our fortune, the heat became so intense that we had to pack old Butkus in cracked ice for two days. I promised him that if we survived, he’d someday get treated like a king. But I almost changed my mind when he practically got us killed in a wildlife preserve. An exceptionally large ostrich decided to peck him to death and attacked the car.”

“Rather than being diplomatic,” Sly continues, “Butkus jumped out in a counter attack and I practically got slaughtered trying to separate them. By the time I got him back in the old car for a quick escape, the thing stalled and a herd of unhappy buffalo descended and attempted to upset the car with us in it. In the middle of all that confusion, Butkus jumped in the back seat and went to sleep.”

“The most incredible thing he ever did, and there are witnesses who’ll back me up, is related to his TV addiction,” Sly says. “I pointed a finger at him and went ‘bang bang.’ On cue, he did one of the best death scenes in history. One leg folded, then another. He finally slumped to the floor, did a little writhing, then rolled on his back and stuck out all four legs straight in the air. It was brilliant!”

Sly was actually forced to sell the dog before he hit it big due to his extreme financial straits.  Stallone sold Butkus to a guy he met loitering outside a 7-11 store.

A short time later, when Rocky was in the works and he had the security of more money in his pocket, Sly knew he had to try to get the dog back.  “The other family had owned him for six months,” Stallone says.  “They weren’t exactly thrilled, but I said, ‘Please.’ I said, ‘This dog belongs in the movie.’ He had suffered along with me for two years. I said, ‘Please let him have a shot in the movie.'”

The unfortunate other family relented and released Butkus to his rightful owner.  The canine got his moment in the spotlight thanks to his friend Sly – he appeared in the original Rocky (credited as Butkus Stallone) and had an equally large role in Rocky II where he even had his own wardrobe – including a dangerous looking studded dog collar.  Butkus also made the transition to the gaming world in 2002 – he can be spotted in UbiSoft’s popular “Rocky: The Game“.

According to an interview with Stallone, Butkus died of a heart attack in 1981. More recently, in a 2015 interview, Sly said of his old friend: “He’s still my desktop wallpaper.”