“I don’t know how much further you can push Rocky.”

Sylvester Stallone participated in a special Q&A session at the Santa Barbara International Film Festival in California last night where he was the man of the evening, feted with a career retrospective and a special award presented by none other than Apollo Creed himself, actor Carl Weathers. (Read about Carl’s introduction to Sly here.)

During the Q&A session, Sly got reflective about his most famous character when asked about the possibility of Rocky Balboa returning to the screen for an eighth time in Creed 2, a film project already being rumored in Hollywood.

I really have mixed feelings about this, seriously. I feel like Rocky, at the end of this movie on the steps, with the help of a young man, and he looks out and says, ‘From here, you can see your whole life’ — it sort of summarizes the whole thing. I don’t know how much further you can push Rocky.

It’s a good point. Creed brought the Rocky saga full circle and closed the curtain on Balboa’s story on a high and hopeful note, much like what’s happened with Sylvester Stallone’s career since his involvement with Creed. The film’s great critical and commercial success was a surprise to everyone – including Sly – and has put his name back on front pages with some prestige. It’s certainly a great way to sign off on a character.

Creed 2 could definitely stay afloat and attract an audience if the production can bring back stars Michael B. Jordan, Tessa Thompson and creator/director Ryan Coogler – so is Rocky’s presence in another sequel even necessary?

On the face of it, there isn’t a lot left that Rocky can offer the storyline unless Coogler and Aaron Covington and brainstorm a miraculous new plot twist, and we certainly don’t want Rocky to follow in Mickey’s footsteps and die onscreen.

Last week, Stallone also parted ways with his longtime producing partner Kevin King Templeton, who he’d worked with since the 1980’s on action films like The Expendables, Escape Plan, 2008’s Rambo, and even Creed.

A spokeswoman explains that “Sly has shifted away from the action genre to focus on more dramatic projects,” which seems wise given all of his recent accolades and award wins, including his Academy Award nomination for Creed.

Stallone’s thoughts on the subject of Rocky’s return in a Creed sequel seem to have changed – back in January, during a Creed cast interview on the steps of the Philadelphia Museum of Art, Sly stated that: “I would like to follow this character until eventually he’s an angel.”

So either his ideas about bringing Rocky back to the big screen have changed, or he was just expressing his sentimental love for the beloved character that’s his favorite – and ours.

“I learn that as I get older you have to be really thankful for what you leave behind,” Stallone said during the Q&A. “Hopefully we left something good behind.”

What do you think Sly means by his recent comments? Do you think Rocky’s coming back again? Let us know in the comments below! 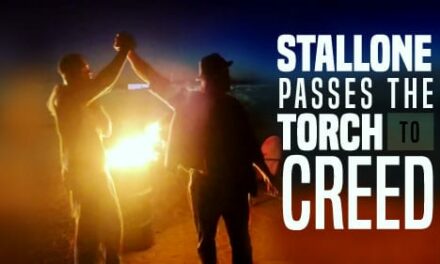