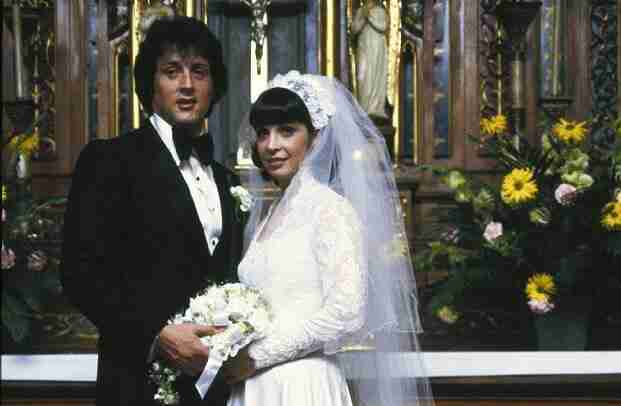 Sylvester Stallone has informed Talia Shire they’ll start shooting Rocky II next October – but he still hasn’t told her where their on-screen love affair will lead them.

If it’s up to Talia they’ll head to the altar in the sequel’s opening reels, for as she keeps reminding the man who became last year’s Hollywood champ as creator/star of the film, “our living in sin in Rocky got me bombed out with a Catholic newspaper and got my mother very upset.”

Talia’s mama should be relieved to learn that even if the hitching doesn’t take place in the upcoming feature, it’s a cinch to happen in Rocky III or Rocky IV or . . .

Stallone is still determined he’ll keep writing sequel after sequel to the story, and that as his life goes, so will the child of his creation.

As Ms. Shire explains, “if Sly feels he’s been exploited by fame, the same thing will happen to Rocky.”

And if Stallone’s life lakes a wrong turn, then Rocky will also follow a rocky course. “Crazy it sounds,” she says, “but interesting.”

Talia believes the nine-hour version of The Godfather which NBC will air next month will be even more interesting than the two Godfather films that copped so many Academy Awards.

Talia received a Best Actress nomination for Godfather II and points out that the feature was written as a six-hour movie. She says that both she and her brother Francis Ford Coppola (who directed the films and kept an eye on editing of the TV presentation) feel that combining the original footage with some two hours of Godfather film never seen on screen, will give the story a new freshness.