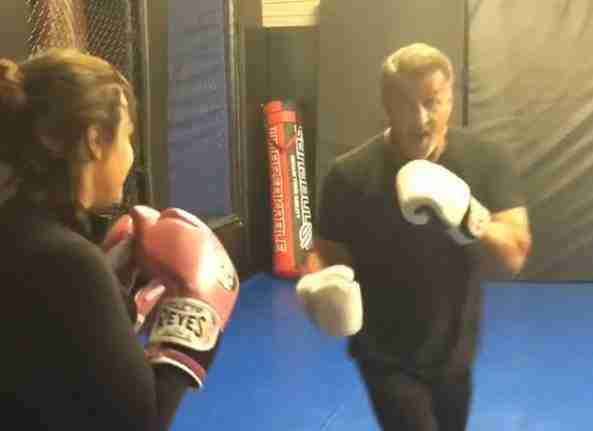 You never thought the punch that would knock Rocky to the ground would be thrown by a 24 year old girl.

That girl was none other than megastar singing sensation Demi Lovato, who sparred with Sylvester Stallone yesterday at the Unbreakable Performance Center in West Hollywood.

“I slipped! I slipped!” Stallone says as he gets up from the mat after giving a terrific mock-boxing-match performance. “I slipped, I swear, it was an accident!”

Lovato regularly works out at Unbreakable, a gym which is frequented by celebrities like Dwayne “The Rock” Johnson and pro-athletes, but is also open to the rest of us.

Check out the Instagram videos of Stallone boxing Lovato below – first, expert boxing choreographer Stallone coaches the singer on how to throw a fake punch convincingly on camera, then the pair go at it!

Spider Rico's Real Life Brawl in 1976: Pedro Lovell vs Ken Norton
EXCLUSIVE! Total Rocky's Interview with Jimmy Gambina
"Taking the Hit" Featurette on Boxing in "Creed"
What Brand of Boxing Gloves Does Rocky Balboa Use?
Celebrate 40 Years of Balboa with the "Best of Rocky" Poll →