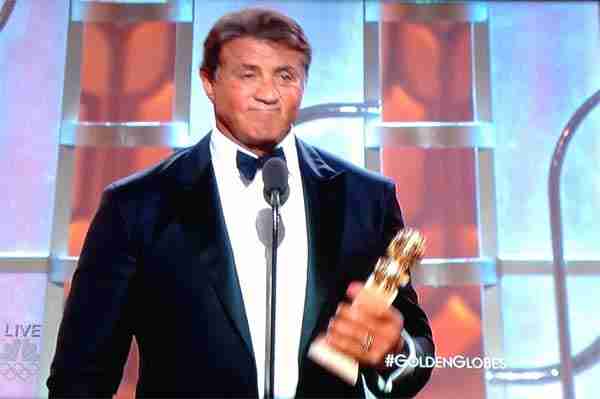 The 73rd annual Golden Globes finally brought a long overdue badge of respect to Rocky’s creator, Sylvester Stallone, when he took home a well-deserved Best Supporting Actor award for his performance as Rocky Balboa in Creed, 39 years after first being Golden Globe nominated for playing the same character.

Sly was one of the few celebs in attendance who wasn’t hit with one of host Ricky Gervais’ many cheap shots throughout the star-studded evening at the Beverly Hilton in Beverly Hills. He went up against fellow Best Supporting Actor noms Michael Shannon (“99 Homes:), Idris Elba (“Beasts of No Nation”), Mark Rylance (“Bridge of Spies”), and Paul Dano (“Love & Mercy”).

Last year’s winners, actors J.K. Simmons and Patricia Arquette presented the category, and before Stallone’s last name could even be uttered by Arquette, the crowd erupted in a massive supportive cheer and rose to their feet for a 45 second standing ovation as a visibly shocked Sly made his way to the stage to accept his award.

“I’m gonna try not to get emotional because I am the sum total of everyone I’ve ever met,” he began, looking dashingly handsome in a classic black tuxedo. “The last time I was here was 1977 …. I was kinda hit by tumbleweeds – it was a long time ago, a different situation. And the view is so beautiful now.”

He thanked his wife and three daughters for their support, saying that having their love is “the greatest reward in the world.”

“I want to thank the legendary producers Irwin Winkler and Bob Chartoff, who actually mortgaged his house to take a chance on a mumbling actor,” he said of Rocky’s original producing team, who also produced Creed. He went on to thank a lengthy list of people involved in his career, but in the shock of the moment, forgot to thank writer/director Ryan Coogler and co-star Michael B. Jordan, both sitting in the audience.

With a smile and a wave, Stallone concluded with: “Most of all, I want to thank my imaginary friend Rocky Balboa for being the best friend I ever had.”

Seconds after his acceptance speech, viewers and notables, including actor Samuel L. Jackson, took to Twitter to blast Sly for neglecting to mention the two men. The many detractors were obviously unaware of the constantly gracious and humble position that Stallone has taken towards his young director Ryan Coogler for the past months as Creed has been promoted in television interviews across the world. Following his acceptance speech, what was not seen in the broadcast was that after the show went to a commercial break, Sly stepped back onstage to the microphone to thank Michael B. Jordan, actress Tessa Thompson and director Ryan Coogler saying: “You are a brilliant, brilliant filmmaker.”

Backstage, actor Jon Hamm was in the midst of conducting his interviews with the press when he was interrupted by the sounds of cheering from the showroom. “Uh oh! What happened?” he exclaimed while looking back towards the stage. “Sylvester Stallone just won an award,” a member of the press replied, to which Hamm turned an ear-to-ear grin to the press and said “Holy cow! Please let him run up the stairs really fast! That would be amazing!”

Stallone joined his fellow winners backstage to face the press and was asked how he felt about doing a father/son story and if the experience was at all therapeutic after suffering the loss of his son, Sage Stallone, back in 2012.

“Ah, that’s a very heavy question,” Sly replied quietly. “To be frank, anytime that you can vent emotions that are real, I think it’s very, very helpful. And most importantly I just wanted to respect his memory and I think we did. So it was good,” he said with a saddened look, “It was good.”

Another reporter asked what it felt like to win and get a standing ovation. “I didn’t expect it at all and I don’t remember a standing ovation, I was in shock – was there really?” he said in disbelief. “You’re kidding! So I’m gonna have to get a Tivo?”

“I did NOT expect to win at all. I was promising myself that I was going to be very aware all the time. It proves I’m not aware, I got very caught up in emotion. Just the mere fact that these incredible people were applauding, it makes me realise that you know, in life, it’s really never over till its over, and it indicates that people should never give up trying, so I think it was a very, very positive message for everybody.”

Also asked about the filmmaking industry today and how it differs from the 1970s, Sly explained that the commercial success of a film today sadly outweighs its artistic value, but that artists in the industry will always exist and will find ways to have their voice heard. “If I wrote Rocky today, it most likely would not be made, and if it did, it would be on 25 [cinema] screens. That’s the dilemma. Artists want to be artistic, and companies have to support the bottom line, they have to make money, so here’s the big conflict today.”

He continued, “It’s gonna be difficult – but as long as the studios are making money, which is good, there’ll always be a film industry for the young artist.”