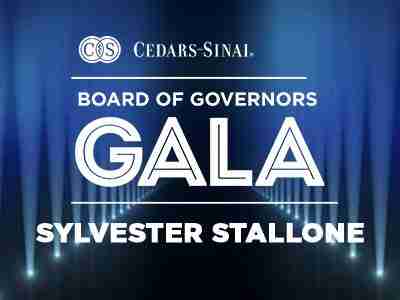 Sly Stallone is slated to receive the Heart of Hollywood Award presented by the Cedars-Sinai Board of Governors, honoring his body of inspirational film work, and nicely timed to coincide with the 40th anniversary of the original Rocky.

The awards gala will take place on Thursday, October 20, 2016, at the Beverly Hilton Hotel in Beverly Hills, CA, home of the Golden Globe Awards where Sly won big in 2015 for his role in Creed.

Proceeds from the black-tie event benefit the Cedars-Sinai Board of Governors Regenerative Medicine Institute. The Board has raised nearly $100 million towards funding lifesaving research and patient care in the past decade.

“[Sylvester Stallone’s] creative work alone has provided more hope and inspiration to those challenged by life’s inequities than we will ever know,” says Board of Governors Chair Leslie Spivak. Past recipients of the Heart of Hollywood Award include Justin Timberlake, Barry Manilow, and Ryan Seacrest.

Comedian Jay Leno will host the event, which will feature a seated dinner, live auction, raffle, cocktails and dancing, along with a live performance by Glee’s Matthew Morrision.

A single ticket to the October awards gala is priced at a hefty at $600, and the prime tickets are sold for as much as $100,000. (Click here for additional ticket prices.)

Sly’s earliest connection with the famed Cedars-Sinai began in late 1979 when he was treated at the hospital for a shoulder injury he sustained during training for Rocky II. Over 30 years later, the effects of that injury were still evident, presenting themselves as bulging veins which Stallone decided to camouflage with colorful tattoos.

”The tattoos are real – unfortunately,” Sly said of his body ink, “I have all kinds of chest injuries; I tore my vein during Rocky II and had 60 stitches. If you’ve seen Rocky Balboa, you’ll know how bad they look. It got worse and worse, and people were saying, ‘Ugh, has he got varicose veins?’ So I thought, ‘f**k it’, and covered them with a tattoo of my wife.”

Sly’s tatts were designed by celebrity tattoo artist Mario Barth and include the image of an Italian stallion, a raven from the poem by Edgar Allan Poe, a portrait of Mrs. Stallone, Jennifer Flavin, and tiger eyes to represent Rocky III‘s “Eye of the Tiger“.