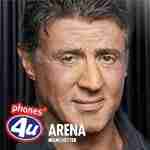 Lucky UK fans, listen up! Sly’s headed back to England for his second live appearance so far this year.

Stallone will be appearing on stage for one night only in Manchester, England on August 1, 2014 at the Phones4U Arena. The intimate theatre style event has limited tickets available, and they are selling out rapidly. This is a once in a lifetime opportunity to get up close and personal with Rocky Balboa himself.

In a new interview released in conjunction with the announcement of this event, Stallone reminisces about the complete turnaround that Rocky’s success brought him, both personally and professionally, in 1976. “To this day it mystifies me; the intelligent part of me should have said, ‘Sell the movie, you have no money, you’re starting to eat your clothes’,” he laughs in a way only hindsight allows. “But there’s a part inside of you that hangs on.” (Read the full interview here)

Olexyfresh Promotions is working in association with Rocco Bounvino who produced the award winning show with Sylvester Stallone at the London Palladium in January 2014. The Palladium event earned rave reviews throughout the national press and this follow-up appearance aims to replicate the quality of that event.