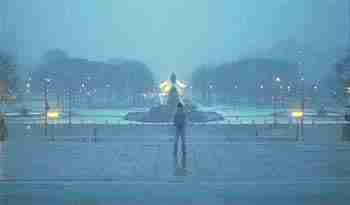 This week on Instagram, Sylvester Stallone recalled being sad during the last day of filming on the sixth installment of his Rocky franchise back in the winter of 2006.

Rocky Balboa’s production crew setup at the Philadelphia Museum of Art to capture the very last scene of the movie – and of Rocky Balboa’s appearance in cinema history.

Older Rocky’s run through Philly harkens back to his very first run in the gray sweatsuit back in the original classic. “That run is the distillation of the entire Rocky experience,” Sly said of the iconic scene.

As the movie’s director, Stallone made the decision to film this sequence last, knowing what a difficult experience it would be for him to let go of the character he created – who in turn, created Stallone’s long-lasting career.

“This is a very special moment,” Sly wrote on Instagram this week of the touching end-credits sequence from Rocky Balboa. “The last day. I did not know the camera was running and I was sad thinking this was the last time I would ever get to play this wonderful character…”

The poignant image of a lone Rocky Balboa standing atop the icy steps of Philly’s art museum as snow gently falls was the perfect bookend to the life of Stallone’s most beloved character. This final scene, coupled with Bill Conti’s strings piece, “Rocky’s Reward”, brought most Rocky fans to tears at the close of what was believed to be the end of an era for the Italian Stallion. How fitting that even Sylvester Stallone himself was lost in Rocky’s moment, never knowing that the cameras were turning as he looked out at the City of Brotherly Love for what he believed was the last time.

Thankfully, Rocky came back for one more round in 2015’s Creed, and both Stallone and Balboa made it to the top of the Rocky Steps again at the close of the movie.

Which film’s final scene was your favorite? Rocky Balboa or Creed?

This is a very special moment. The last day . I did not know the camera was running and I was sad thinking this was the last time I would ever get to play this wonderful caracter ..