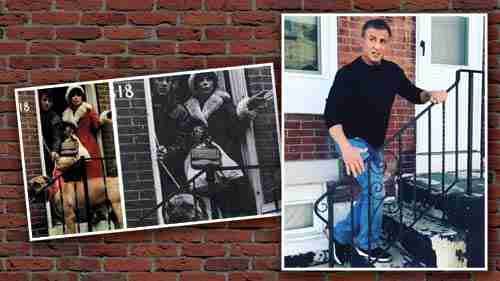 This week while Creed II filming continues on location in Philadelphia, Sylvester Stallone has visited a couple of fantastic parts of Rocky Balboa’s world and has posted them to his social media.

In CREED 2 with my original buddies from the first Rocky … CUFF and LINK , now about 44 years old!

Earlier this week, Stallone was reunited with Rocky’s turtles, Cuff and Link – who last got a brief cameo in 2015’s Creed, and look like they are set to reprise their roles again for Creed II.

Today, Stallone made a very heartwarming visit to the steps of 1818 Tusculum Street in Kensington, better known as Rocky Balboa’s apartment. This is one of the most popular Rocky location tour spots and is always considered among the most meaningful to fans, and evidently to Sly himself.

“I don’t know how many times I’m going to get a chance to visit this place, so maybe this is the last time I sit here on the Rocky steps,” Stallone says as he walks up the dilapidated steps of the old apartment building and takes a seat.

“I remember when I did the scene with Adrian here, and I said, ‘Look at this face, is this a face you can trust?’

The last time Stallone was filmed at Rocky’s apartment was during the emotional “tour” scene in 2006’s Rocky Balboa when Rocky and Paulie visit the old Philadelphia haunts on the anniversary of Adrian’s death. The apartment was used in the original film, Rocky II, and Rocky Balboa.

“Some things come to an end, some things don’t,” Sly says. “There’s just no end to Rocky.”